As our plane rose into the dusky evening over Kuching, bound for Penang, four-year-old Blake gazed wistfully out of the window, and said, “Oh, I miss Ka-Ching.”

It’s that kind of place. The river flows quietly by, the people smile and say hello as you pass them in the street, and dozens of cat statues lend it a quirky character that can’t help but endear the city to its visitors. Unless you’re a dog person… But more about the cats later.

So, where in the world is Kuching? It’s the capital of the Malaysian state of Sarawak, which sits on the northwest coast of the island of Borneo. I wrote a bit about Sarawak’s history in my first post from Borneo. Sarawak’s indigenous cultures, British colonial heritage (more correctly, the impact of the British Rajahs – a family of self-proclaimed rulers) and Chinese and Indian migrants, have all played a role in creating the Kuching that exists today. Like much of Malaysia, it’s a cultural melting pot, but in Kuching life is a little quieter, and calmer; a bit like the slowly-moving river that flows through its heart. 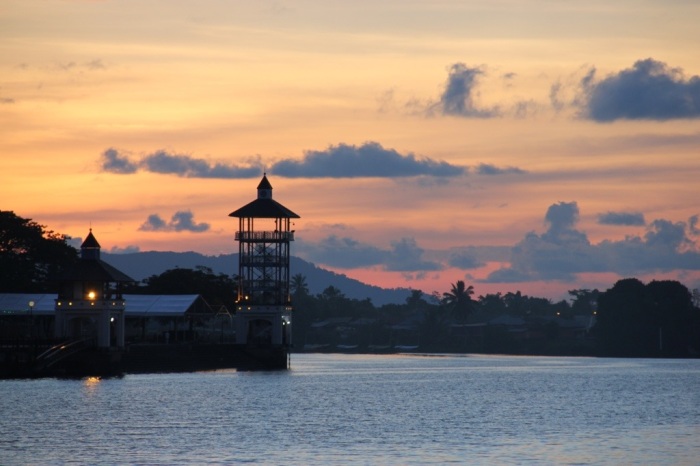 The top 5 things to do in Kuching:

1. Relax by the riverside

The south bank of the Sarawak River has been revamped in recent years to create a peaceful promenade. Shady pedestrian pathways, overhung by trees, and decorated with flowerbeds, become fairyland at night, the colourful lights reflected in the river below. 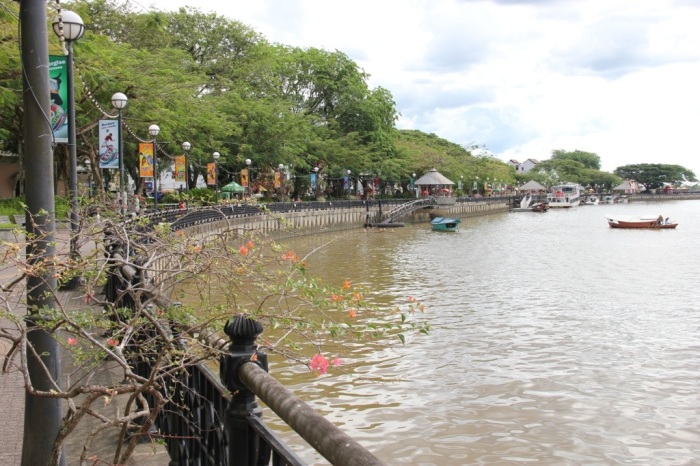 Brown with rich soil from upstream during the day, by night the river glowed like the city. The kids loved it. And there was something really magical about the river at night, sleeping peacefully under the city’s lights. Market stalls line the esplanade, locals and tourists alike soak in the tranquility on park benches, and riverside restaurants do a busy trade.

The James Brooke Bistro, named after one of the white Rajahs of Sarawak, sits on a grassy lawn right beside the river. Sipping a beer on the colonial verandah and watching the kids play on the grass, fairy lights and river in the background, was a great way to spend an evening. The yellow sampan on the grass outside was a hit with the kids, day and night.

It’s coincidence that in Malay ‘kucing’ means ‘cat’, but, hey, what better reason could there be to become the cat city of Malaysia? There are three main cat statues around town, like this one.

And there are other little ones here and there, like this one. 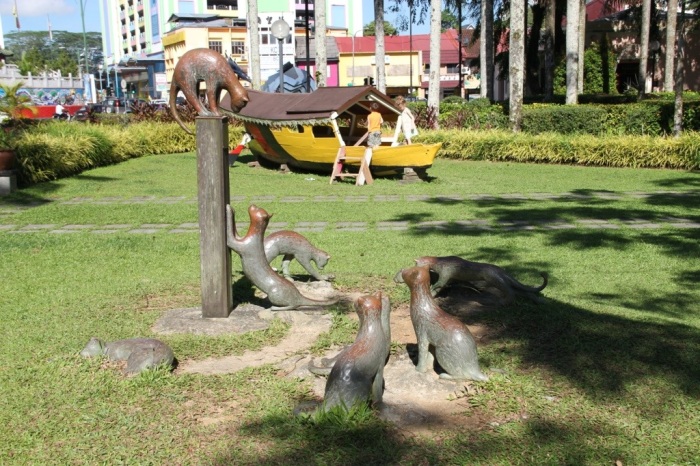 There’s a cat museum outside town. We didn’t get there, but if you’re really into the cat thing, it would be a quirky addition to the Kuching cat tour.

3. Take a stroll through Chinatown

Kuching has an old Chinatown, centred around Jalan Carpenter, and a new Chinatown, which is a busy commercial area, along Jalan Padungan, which is worth a visit for its markets. There are quite a few restaurants around here, too.

Jalan Carpenter and around is a gorgeous place to see the traditional architecture of old Kuching town, and a bunch of Chinese temples. The Harmony Arch sits at the entrance to the street.

The Hiang Thian Siang Temple houses a shrine to Shang Di (Emperor of Heaven) and was rebuilt in 1884 following a fire that gutted the building.

Across from the temple is a good Chinese hawker centre to grab a bite to eat. It was Sunday when we visited, and the streets were quiet, but beautiful. 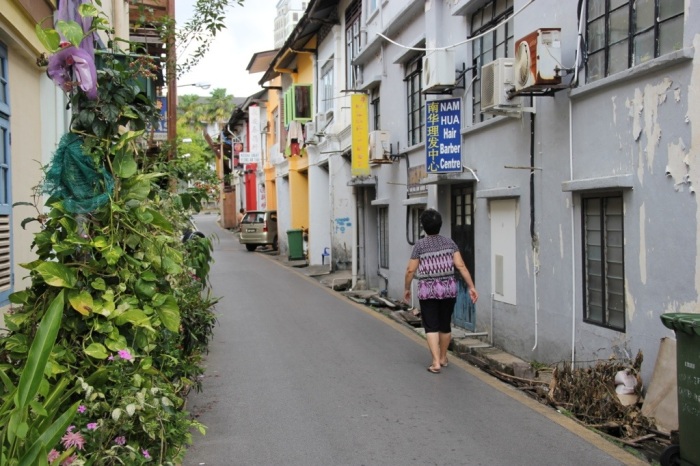 The Hong San Si Temple dates back to the 1840s, and colourful dragons sit atop its roof.

Whether you get on board the tiny, putting sampans that ferry people to and fro across the river, take a fast boat out to the mangroves downriver, or do one of the many touristy sunset cruises on offer, it’s worthwhile to get out on the water.

With Miss Phoebe’s fear of small boats discovered whilst doing a mangrove trip out on the Santubong Peninsular, we opted for the big touristy ferry option, for a one and a half hour sunset cruise. Those without boat phobia might be able to do something more adventurous, but it suited us. Phoebs was a bit worried to start, but since no lifejacket was required, it must be safe, right?

View the unmistakable Sarawak State Assembly from the river. 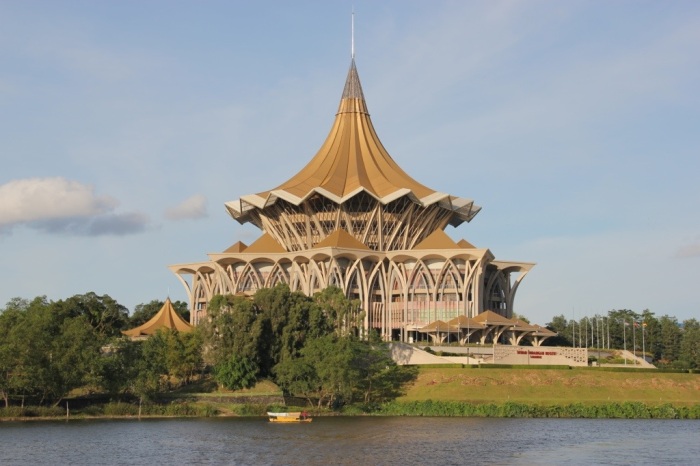 Relax with a cool beverage.

Take in a cultural show.

Catch a glimpse of the colourful local fishing fleet.

Or just enjoy the company. Awwwww.

I’m a sucker for museums. And in addition to the cat museum, Kuching has a couple of good ones covering all things natural, historical, artistic, anthropological and ethnological.

The Ethnology Museum has some rather worn-out stuffed things downstairs – animals from the local area and beyond. We love stuffed things, so this was cool, despite the worn fur. Upstairs is focused on Borneo’s indigenous cultures, including a replica of the inside of a Bidayah longhouse, skulls included. (The Bidayah people were renowned headhunters.)

Dewan Tun Abdul Razak, just across a footbridge from the Ethnology Museum, is another museum, which houses some great exhibits on Sarawak’s history, from prehistoric archaeology of the region to the present day.

The Art Museum has some interesting pieces, and is also only a stone’s throw from the Ethnology Museum.

These museums were all free to visit. We gave a little donation, since, unlike the locals, our taxes don’t contribute to keeping the museums running.

There’s a lovely garden area behind the museums, great for a bare-footed run-around for four-year-olds. 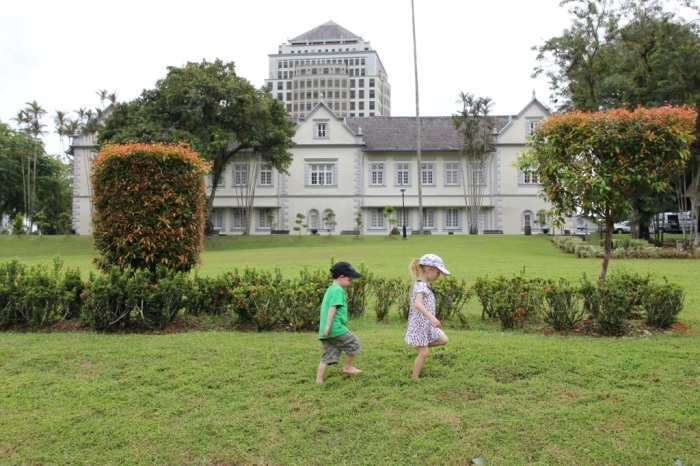 And for watching a tropical storm roll in.

There are a bunch of other museums: the Chinese History Museum, the Islamic Museum, and of course the Cat Museum, to name but a few, and many other sights in the city of Kuching that we didn’t get to, but we loved the city. It just had a good vibe, you know? A top place to visit!

Linking up for Travel Photo Monday with Travel Photo Discovery and Travel Tuesday. Check out the links on these two cool sites for more travel photos and stories.

27 thoughts on “Kuching? Ka-Chow! Top 5 things to do in Kuching, Borneo”