Kuching, in the state of Sarawak in Malaysian Borneo, is a fantastic place to visit with kids. Not only does the city itself offer an array of activities – I wrote about them in my post about the Top 5 things to do in Kuching – but there are some brilliant things to see and do by taking day trips into the beautiful natural surrounds outside the city.

I’m going to list my top five, because I’m in a top five kind of mood.

1. Visit the Semenggoh Wildlife Centre and see the amazing orang-utans

Just outside Kuching, and the Semenggoh Wildlife Centre is home to a bunch of rescued or orphaned orangutans, and their offspring, including some gorgeous babies.

Semenggoh Nature Reserve is around seven square kilometres in area, and the orang-utans who live here roam freely in the jungle of the reserve, coming in at feeding times only if they are hungry. Some of the orang-utans are completely self-sufficient – they find their own food out in the reserve – which is the ultimate goal of the centre. Others come in to feed at the forest feeding platform. There are two feeding times each day, when visitors hope to catch a glimpse of these beautiful and endangered creatures. Feeding times are 9am and 3pm, and each feeding time lasts an hour.

We gathered with a bunch of other tourists before the nine o’clock feeding, and were briefed on the behaviour of the orang-utans – and given some tips on our own behaviour. We were entering the orang-utans’ jungle; there are no fences. Don’t get any food out. Let go of your bag if an orang-utan grabs it. Don’t use tripods or walking sticks because they look like guns. Don’t stare orang-utans in the eye.

Following the guide, we walked along a forest track for around five minutes, and gathered on a wooden viewing platform, facing another wooden platform. The guide then began calling the orang-utans in.

After around five minutes of calling, and thinking maybe we were out of luck, we could hear the cracking of branches in the distance, behind our platform. As the sound got closer, we had to move off the platform, in case the approaching orang-utan decided to take to the ground. The noise in the branches continued, until overhead we could see flashes of orange as an enormous male orang-utan came through the canopy, then along a rope from high above, and sat down on the platform. We looked at him. He looked at us. We took photos. He ate bananas. We were a bunch of animals checking each other out. 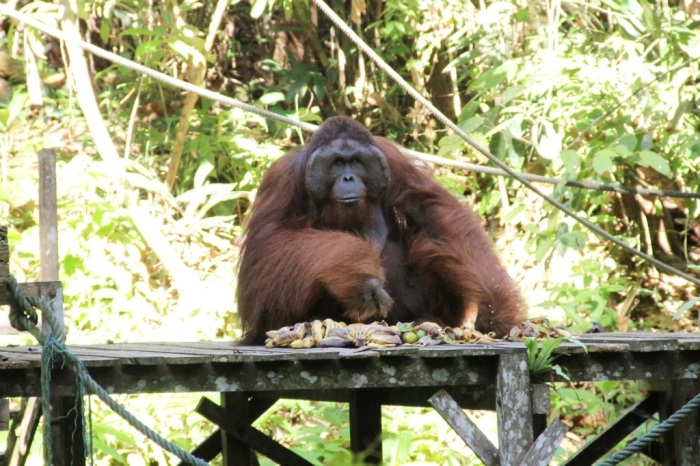 He then decided to take a stroll up the path back towards headquarters. The kids loved how he just walked up the track. After a suitable amount of time, we followed him to another section of forest, where we were lucky to spot a mum and her baby. Majestic! 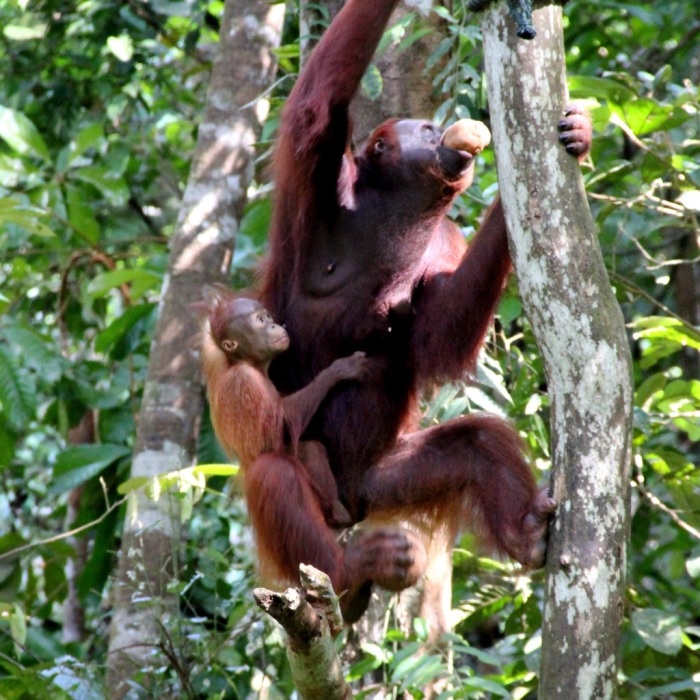 Coming to Semenggoh was one of the reasons why we decided to come to Borneo. Steve and I visited Sabah, Malaysia’s other state in Borneo, ten years or so ago, and saw these beautiful apes at the Sepilok Rehabilitation Centre there. To give Phoebe and Blake the chance to see orang-utans, a seriously endangered species, in the wild (well, semi-wild), was one of our goals. The kids were in awe. So were we. What an experience!

How do you get there? You can take a local bus from Kuching. It takes around 45 minutes. There are also a bunch of tour companies that organise excursions around Kuching. With them, you can pair a visit to Semenggoh with a kayaking experience, visiting a longhouse, or some hiking, for example.

There are a heap of operators, but a special shout out goes to Laurence and the team from Borneo Experiences. I popped in for a chat with Laurence in Kuching to ask about possible day trips, but because Miss Phoebs wasn’t likely to go gladly into a kayak (read about our boating experiences in Santubong), and neither of our four-year-old twins are ready for proper hiking, he suggested that rather than taking an adventure tour, we should just hire a taxi for the day to take us to Semenggoh, and some other sites of interest. He even hooked us up with a reliable taxi driver! So for 200 RM (about $70 Australian) we had a taxi for a whole day, with an English-speaking driver, who drove us about the countryside. And Laurence organised it for nothing! Next time we’re there, we’ll be kayaking with Borneo Experiences for sure!

After Semenggoh we jumped back into the cab with our local expert taxi driver William, and headed for the Bau region, about 45 minutes away. There are two caves to visit in the area. The Wind Cave is a series of three dark tunnel caves filled with insect-eating bats and their stinky guano, but the kids enjoyed it. Our favourite, though, was the magical world of the Fairy Cave.

After climbing an enormous concrete staircase from the road level (I am not exaggerating when I say it’s around 300 steps – we counted them on the way down – but it’s SO worth it), you arrive here. 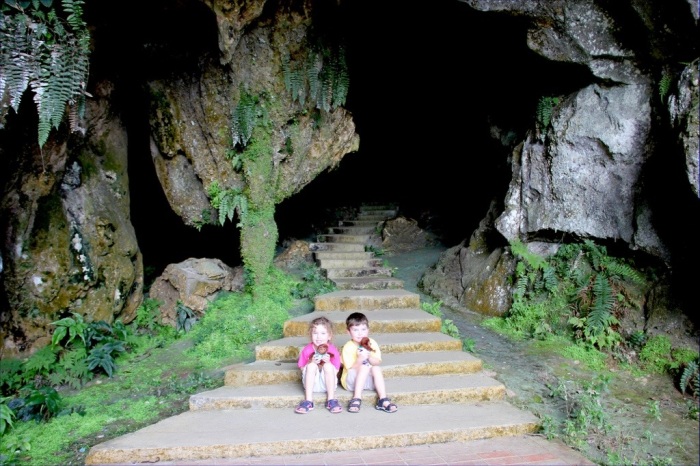 That green is really that green, and that cave is really that dark, and those gorgeous winding steps disappear into blackness, and you have no idea what you are going to see when you enter.

We used our torches. 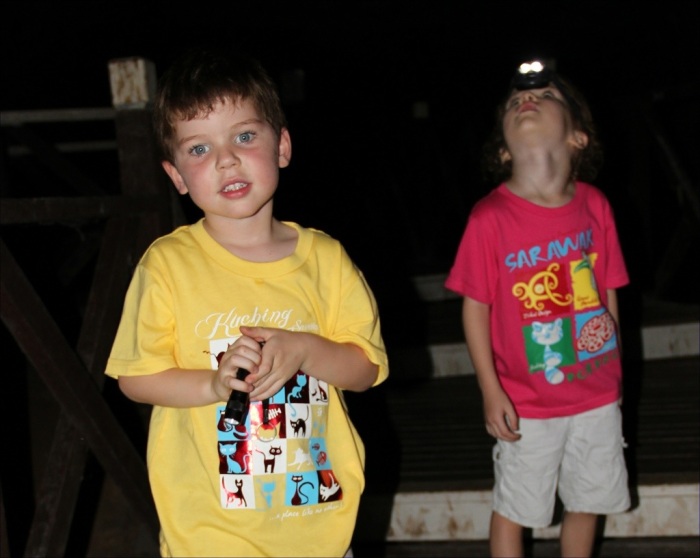 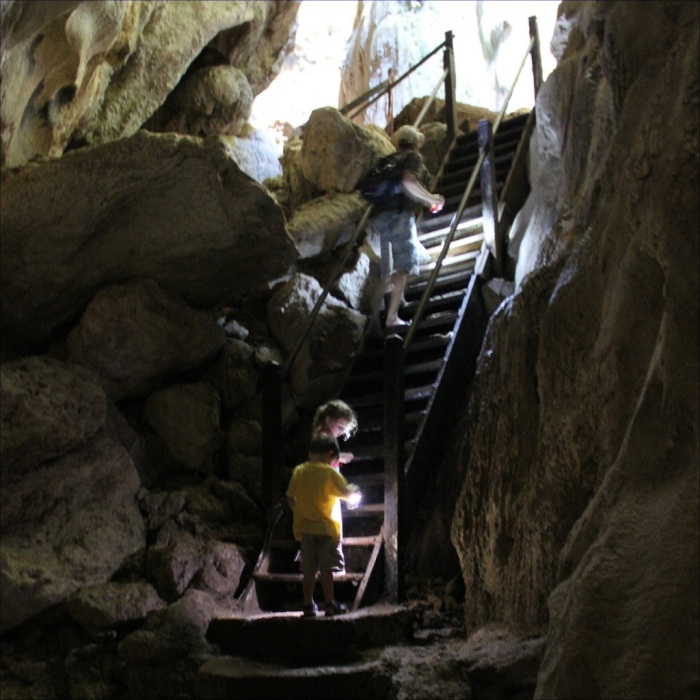 And then truly arrived in fairyland. 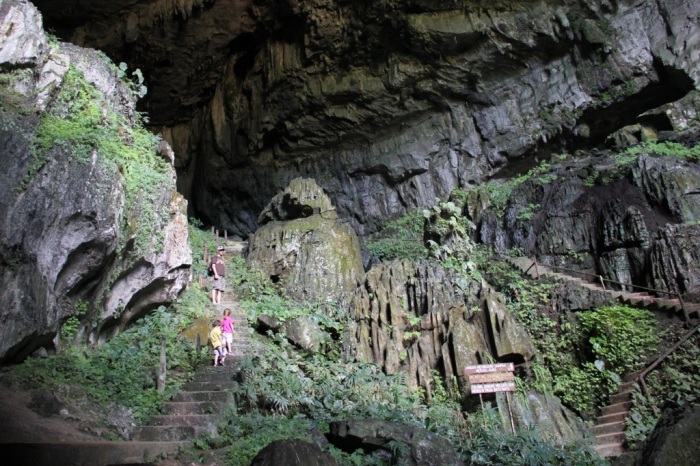 Moss and tiny ferns cover the ground, as the enormous cave entrance, which is 30m above the road on the cliff face (hence the climb to get in), lets sunlight into the cavern, which is massive. Water drips from above, feeding the little plants, and bat poo provides a fertile soil.

I cannot describe how in awe of this place I am. No pictures could do it justice. (Which is just as well, because my camera ran out of battery after trying to take photos of bats in the Wind Cave, so I didn’t get to capture the expanse of the cavern.)

It’s one of those places that you really have to see to believe. Steep cement staircases wind around the cave, and up to the cave entrance. We firmly gripped the kids’ hands on the rail-less stairways, and wandered the cavern. The view from the entrance looking back into the cave is spectacular. Indescribable. Mother Nature, you’re amazing!

Phoebe kept asking where the fairies were. I wouldn’t be surprised if they were hiding under those tiny fern fronds.

If you’re ever in Kuching, you MUST go to the Fairy Cave.

3. Get tribal at Sarawak Cultural Village

We visited Sarawak Cultural Village, located on the Santubong Peninsular, at Damai, when we stayed at Permai Rainforest Resort, but you can also reach is as a day trip from Kuching – it’s only an hour’s drive away.

Known as a local “living museum”, the village features the traditional buildings of the indigenous people of Sarawak, including a full-scale Bidayah longhouse. This is the Orang Ulu longhouse. 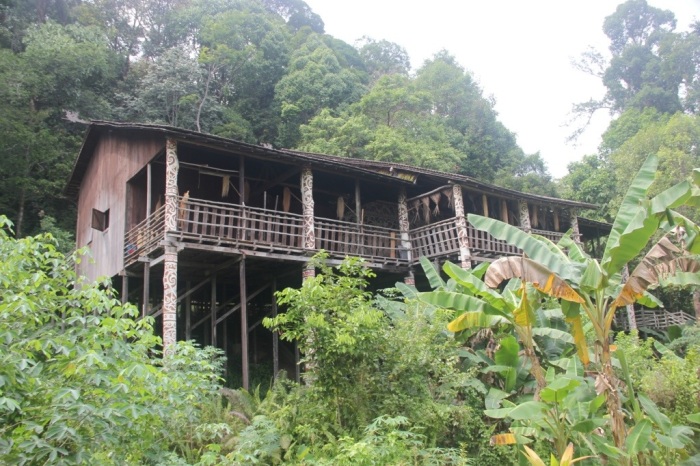 The kids received a passport and they collected stamps from the various houses. There were locals at each house to give a little demonstration of traditional cooking, or jewellery-making or weaving, which was lovely. They were smiling and friendly. Phoebe and Blake enjoyed collecting stamps, and it became a bit of a race around Sarawak to collect them. 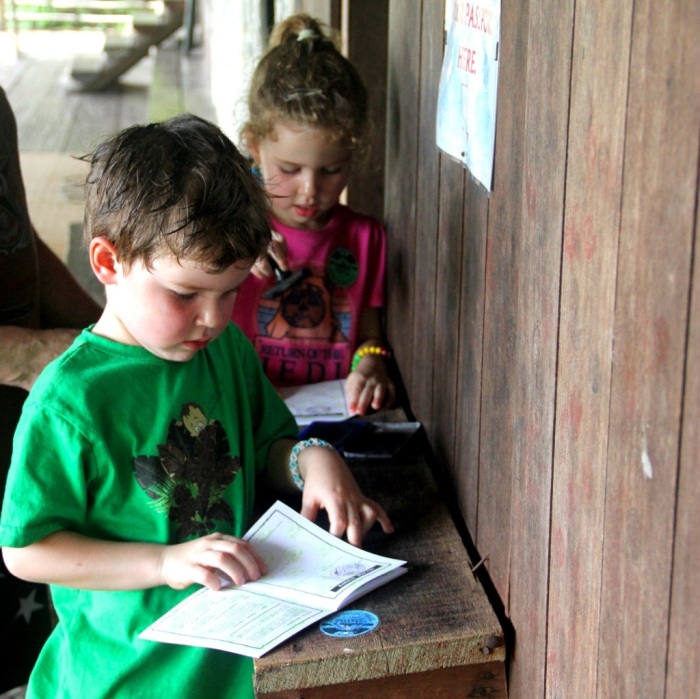 There was a cool bamboo bridge. 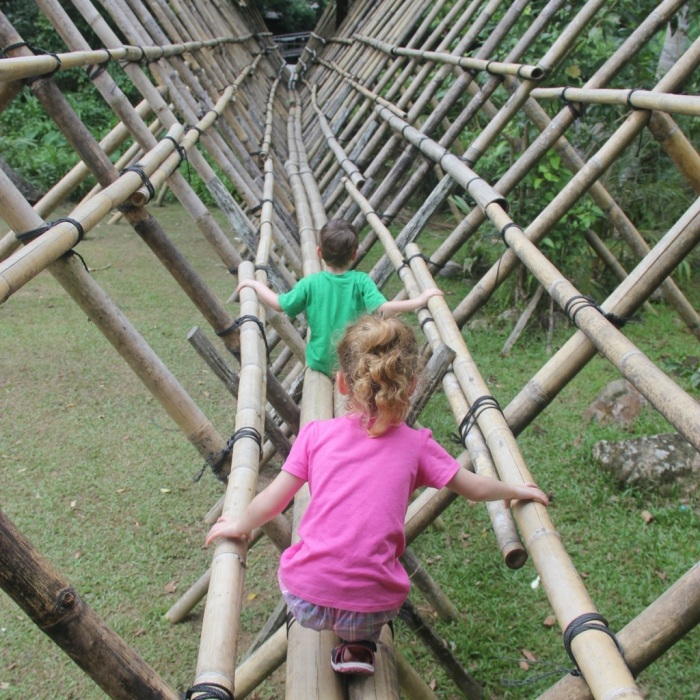 And a cultural show of dance and music is on at 11am. 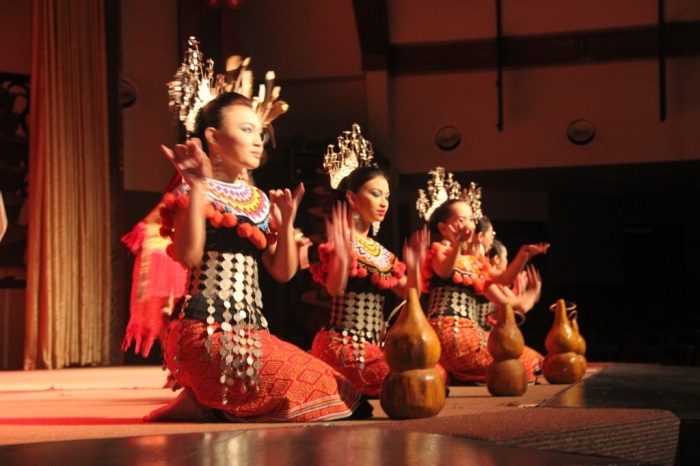 This was a talented Orang Ulu blowpipe hunter, who successfully shot darts at balloons from a distance. 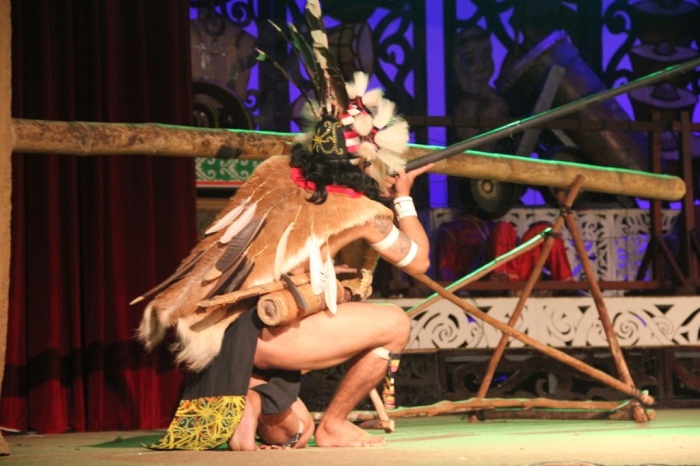 The cultural village is a great half day trip from Kuching, or stay the day and visit the beach at Permai Rainforest Resort just down the road – they have cheap day rates to use the beach. See my post here for the beautiful rainforest and beaches on the Santubong Peninsular.

We took a mangrove tour when staying on the Sanubong peninsular, but lots of the tour outfits in Kuching organise these boat tours as day trips, too.

Spot Irrawaddy dolphins, proboscis monkeys, crocodiles, and firefiles. Read all about our trip on my post “Dolphins, monkeys and fireflies… and why do we need a life jacket?” – it was a massive highlight of our time in Borneo. 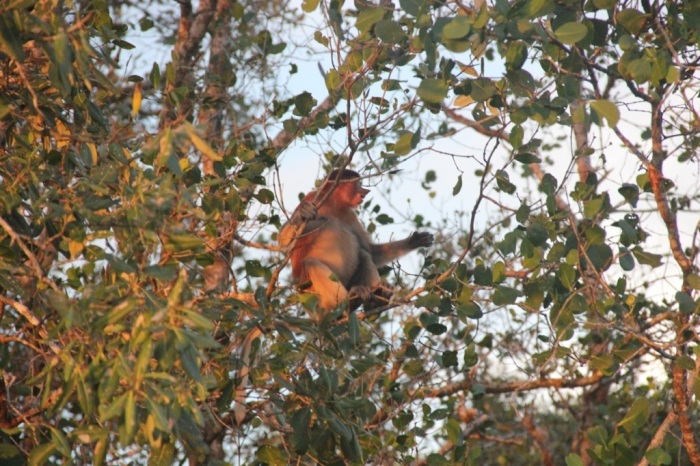 We didn’t do this, but if we didn’t have a four-year-old who was scared of boats, we would have. Borneo Experiences offer a tour called “Primates, People and Paddles” where you visit Semenggoh, then the Annah Rais longhouse, in the Penrissen mountains where Sarawak borders Indonesia. The building is estimated to be two hundred years old, and Bidayah people still live here. Annah Rais features a traditional Headhouse, lined with human skulls from the tribe’s headhunting days.

After mingling with the locals at Annah Rais, you drift leisurely down the river in kayaks, picnic on the riverbank and swim in the river, spotting wildlife along the way. What a perfect way to spend a day! Older kids would LOVE this.

And there you have it! A bunch of awesome day trips around Kuching, with kids, or without. You get that we loved the place, right? No wonder Blake said he missed Kuching as we flew out over the city – it was amazing. Thanks for having us, Kuching!

Want more? Here are my top five things to do in Kuching city – the river, the temples, the cats, and more!

If you want to know more about travelling in Sarawak, visit Sarawak Tourism, or find Sarawak Travel’s great page on Facebook.

Read about more of our Malaysian adventures in Kuala Lumpur City Centre Park, KL Chinatown, Batu Caves, staying on the Santubong Peninsular in Sarawak, our wildlife-spotting boat trip in Santubong, and things to do in Kuching.

Linking up for Travel Photo Thursday #TPThursday with Nancie from Budget Travelers Sandbox. Pop on over and read some other great posts if you have a spare few minutes.

53 thoughts on “Orang-utans, Headhunters, and a Fairy Cave: Top 5 things to do around Kuching, Sarawak”