I’m sitting here today, on school holidays, putting together a session for staff development for the first day back. To the students and parents, that’s a pupil-free day. To my husband (not a teacher), it’s coffee and cake day. As for the teachers, well, you’ll generally find a spectrum of attitudes to professional development days ranging from high enthusiasm to mortal dread.

The focus of my session is on Conceptual Programming. We’re in exciting times in many curriculum areas as we adapt our teaching and learning to the new Australian Curriculum. English, Maths, Science and History high school teachers all have new NSW Syllabus documents to plan from for 2014, and there are some exciting (did I say exciting again?) cross-curriculum priorities to integrate into our units of work – Aboriginal histories and culture, Asia and Australia’s engagement with Asia, and Sustainability – my personal favourite – among other things.

The new curriculum offers us a chance to reflect, examine and evaluate what we do, and improve our practice. Building our programs conceptually allows us to create learning opportunities that develop our students’ ability to engage with big ideas, examine and explore key and problematic issues in society, to pose, and answer essential questions that have relevance to them. It’s exciting! (Yes, it really is.)

Partly as a form of procrastination, and partly as research, I’ve been surfing Youtube today (as you do), looking for an inspiring little snippet to get the staff thinking and engaged on that first (oft-loathed) day back at school, and I stumbled across a video that’s been around for a while. You might have seen it (if not it’s here: http://www.youtube.com/watch?v=zDZFcDGpL4U). It’s an animation of a Ken Robinson talk about society’s need to make an educational paradigm shift, reinforcing the idea that school as an institution doesn’t cater to 21st century learners; that school, in fact, stifles creativity. Which, as one of my esteemed and learned colleagues just pointed out to me over another social media platform today, is not a new idea. As she also suggested, the video has been done to death with teachers, so I won’t be using it, but it did raise some interesting questions about where we’re at with our education system.

What has all of this got to do with preschool geniuses? I’m getting to it…

Robinson cites a 1968 study by George Land and Beth Jarman, published in their book Breakpoint and Beyond, which, although dated, outlines some interesting findings. Land and Jarman administered a divergent thinking test to 1600 people; divergent thinking being the capacity for creativity, the ability to determine multiple solutions to a problem. This is the type of test administered by NASA to select innovative engineers and scientists. The results in the sample group were astounding – 98% of the participants scored at the genius level for divergent thinking. The sample group? Five-year-olds. 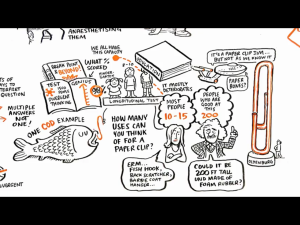 In this longitudinal study, only 32% of 10-year-olds, and 12% of 15-year-olds reached the same level of creative thinking. Of 280 000 adults tested, only 2% reached genius level. Robinson used an example of divergent thinking in his talk: that divergent thinkers would be able to come up with 200 uses for a paper clip, whereas most of us could only come up with 10-15. A divergent thinker would think outside the box. Does the paper clip have to be in the form we know it? If there are no limitations, why not a 200-foot paper clip made of foam?

Preschoolers are geniuses in divergent thinking, according to this study. All those questions, which we often laugh at, the way that their logic seems to have not quite sorted itself out yet, is divergent thinking in action.

An example. Three-year-old Phoebe asked me a couple of months back if Aunty Mel needed some more trees at her house. It was a question out of the blue, and I didn’t understand it at first. We had been hanging out with my friend Mel. Last year Mel celebrated 15 years since a double lung transplant, but her transplanted lungs are deteriorating. She’s on oxygen and in a wheelchair most of the time. Even though she deserves a blog tribute of her own (to come – she is the most amazing person I know), I know Mel won’t mind me mentioning her here.

After a day out with Mel, the kids asked about Aunty Mel. They asked why she has tubes in her nose, and why she’s in a wheelchair, and we told them. I tried to tell them as accurately as possible, in language that three-year-olds would understand. I told them that our lungs take oxygen from the air that we breathe in, and that the oxygen is transferred to our blood, to make our muscles and our brain work. I told them that Aunty Mel can’t walk very well because her lungs can’t absorb enough oxygen, and she gets puffed out and tired very easily, like when they’ve been running around a lot. I told them that there are lots of people whose bodies don’t work properly, and that they are so very lucky that they are healthy kids.

When Phoebe asked about whether Aunty Mel needed more trees at her house, I must admit I was a little befuddled. Then it clicked. Phoebe likes to ask questions at bed time. One of her favourites is “What do trees do?” (so proud), so we go through a list of all the wonderful things trees do: offering homes for animals and birds, shade, making our backyard and much of the world beautiful, supplying wood for building, and paper… and providing oxygen for us to breathe. And there you have it: beautiful little Phoebe’s solution to Aunty Mel’s bad lungs – trees at her house to give her more oxygen. Divergent thinking in action. If only trees were the cure Mel needs.

Is my kid a genius? Well, it’s certainly an interesting study. If we do lose our ability to think creatively, why is that? School could be a culprit. As Robinson suggests, formal education is focused on right and wrong answers from an early age. Or perhaps we just grow up and logic takes over and we realise there are no 200-foot foam paper clips. Why bother hypothesising about them? Although, it’s clear that the people who do innovate in our society are the ones who can see the all of the applications of 200-foot foam paper clips.

For parents of preschoolers, the possibility that our child/ren may very well be creative geniuses is certainly eye-opening. I wonder if it’s possible to somehow retain the capacity for creativity of a five-year-old, even after they start school…?

How can we foster divergent thinking? I don’t know the answer, but I suspect, as in all good education, that it lies in requiring kids to think. To think in different ways, to think creatively and critically. Rather than trying to give children the ‘right’ answer when they ask ‘why’ or ‘how’, maybe we should direct it back to them first, and hear what they have to say. I find myself often providing detailed answers to their questions. How is thunder made? (Long and possibly inaccurate explanation of lightning and thunder). Why do bats come out at night? (Explanation of the habits of nocturnal animals). Why don’t some people have houses? (Long explanation of social inequalities and material differences). Maybe what we really need to do is just listen, and let them get creative, and explore, before telling them how it “really” is.

I end where my journey began: conceptual programming in secondary school. Despite our students’ apparent loss of creativity, for whatever the reason, teachers still need to provide opportunities for adolescents (like preschoolers) to think creatively, to philosphise, to ask why, and to connect to, and build upon, what is already known, to examine and explore, to create and construct, to analyse and apply, and to reflect and evaluate.

THAT will be the crux of my presentation for staff development day, when I get around to putting it together. Maybe tomorrow…

11 thoughts on “Could your preschooler be a genius?”