Ah, the Sutherland Shire. Who needs Sydney Harbour when you have Port Hacking? Who needs the Manly ferry when you have the Curranulla? OK, so it’s not quite as memorable as that rocking ride across Sydney heads to Manly, and there’s no Opera House or Harbour Bridge to gawk at, but the kids don’t care where you are, as long as they’re on a boat. Am I wrong?

Did you read my first ‘outdoorsy thing to do with kids in southern Sydney’? It was all about Cronulla’s beaches. So, while you’re there, pop on over to Gunnamatta Bay, and jump on the ferry to Bundeena.

If you haven’t been before, the wharf is right behind Cronulla Station, and the ferries run hourly on the half-hour from Cronulla to Bundeena. For the return trip, it’s hourly, on the hour from Bundeena to Cronulla. Just don’t try to catch the 12:30pm or 1:00pm ferries on weekdays, as there aren’t any. (The ferrymen need a lunch break from all the hard work chugging back and forth, you know?)

I grew up in the Shire, but I think this recent trip with the kids was only my second ever ride on the Bundeena ferry. That said, based on the kids’ enjoyment of this simple trip, I don’t think it will be that long before we venture onto that little green and gold vessel again.

Riding the Bundeena ferry is a little like stepping back in time. Jump on board, greet the captain as he passes by on his way to the bridge (a small room through a wooden door – does that qualify as the bridge?), and away you go! Marvel at the eclectic blend of yachts belonging to the local elite, and rusty fishing boats, on Gunnamatta Bay. Be awe-inspired by the mansions of the Shire’s ‘old money’ (dating all the way back to the 1960s, I’m sure). Wave to passers by on kayaks (they will probably be going faster than you). Laugh at the first mate’s joke when he comes to sell you a ticket onboard (I don’t remember what the joke was, but the price is $6.30 each way for adults, and $3.15 for kids – I looked that up on the Internet as I forgot that, too). I also made up that he was the ‘first mate’. It sounds better than ‘ticket seller’ don’t you think? Plus, he did have to tie the boat up to the wharf, so that qualifies him, in my humble landlubber’s opinion, for the title of first mate.

Once in Bundeena, grab a bite to eat or a coffee. Explore the playground just up the hill from the wharf. The slide is awesome. It’s fast, and has a twist. Wander along the beach. Take a dip. Rescue a Christmas beetle from the drink. Nawwww, isn’t he a sweetie? 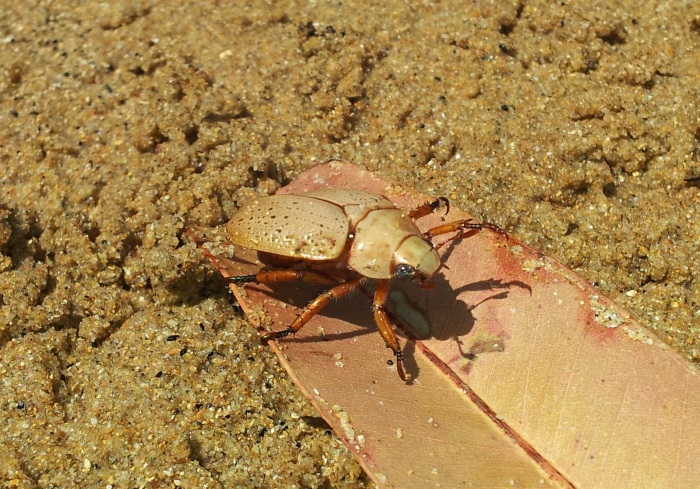 I couldn’t resist a little gratuitous Christmas beetle pic. The kids were very proud of their rescue.

Make sure you have a photo with the naked lady statue. That was a must for us (as demanded by P and B). Note the cute ferry in the background.

That said, the statue, called Spring, was donated by a local artist on behalf of his deceased artist wife, who created the sculpture, so no disrespect is intended here. Clearly, P and B were drawn to the art.

If you have the time, energy, and slightly older children who may not mind a little bit of a walk, then you might want to take a stroll across to Bonnie Vale, to the west of the main part of town. Bonnie Vale is part of the Royal National Park. You can rent a kayak or paddle board over there, have a picnic, or stay and camp if you feel so inclined. (In that case, you’ll probably want to drive instead of taking the ferry.)

Alternatively, Jibbon Beach is a good walk in the opposite direction, east from the ferry wharf, where you’ll find another lovely patch of sand that extends into the Royal National Park towards Jibbon Head, which is the southern headland entry to Port Hacking. If you can’t make it all the way to Jibbon, see if you can find the tiny, gorgeous Gunyah Beach, off The Avenue. Access this hidden gem via stairs from The Avenue and Beach St, and find a beautiful patch of sand that the locals love. It’s a great spot for rock pools, relaxing with a book, and a dip – it’s probably about half a kilometre from the ferry wharf to Gunyah, and a kilometre to Jibbon. I love Gunyah and Jibbon, but if you have little ones, you’re probably best to bring the car if you want to explore those areas.

If you want more info on things to do in Bundeena, check out this website.

As for us, we didn’t do much on this trip except for ride the ferry, scoff a milkshake, conquer the slide (yep, I had a few turns, too), play in the sand, paddle in the creek, and rescue a beetle; all evidence that, most often, it’s the simplest things that make for the best days out.

8 thoughts on “Bundeena Ferry: Outdoorsy things to do with kids in southern Sydney”