I was met with much excitement when I suggested that we head into town on the train for a city adventure. It’s the usual reaction from my pair of four-year-old suburbanites, for whom a meander through our fair city’s CBD is always high on the list of cool things to do.

I quickly quashed any ideas about a visit to the aquarium. I’d forked out a week’s wage only a couple of months ago for our last visit. I reminded them that we had only recently done the aquarium dash. (For us it’s more like “Race Around the Aquarium” – searching for the elusive “bigger” shark that we never seem to be able to find.)

My suggestion of a museum was also met with cheers. Another non-surprise. P and B love anything that’s at the end of a train ride to town. And we do have a soft spot for museums.

Having visited the Powerhouse, Maritime and Australian Museums several times each over the past couple of years (read about the fun we had at the Australian Museum), and recently Hyde Park Barracks, I thought we’d give the Museum of Sydney a go. I wasn’t sure about its suitability for kids, but there was a photo of some kids on their website, so I figured it would be okay.

Fantastically, it was more than okay. It was a hit!

The MoS is one of the Sydney Living Museums (formerly the Historic Houses Trust) and, as its name suggests, the Museum of Sydney explores the history of our city. Built on the site of the colony’s first Government House, it’s a really interesting place – relatively small, with diverse exhibits about people and events that have been significant to Sydney – and these are the features that made much of it relevant for the short attention span of almost-five-year-olds, who are now starting to grasp a sense of place and connection to their home, their city, and their country.

The forecourt demanded their attention from the outset – a glass window in the footpath peeks under street level – and sparked a discussion of how much history is beneath our feet as we walk the CBD streets. Stonework from roads, building foundations, pipes, bricks, and other remains sit just a few metres under the asphalt and concrete of the modern city. Phoebe and Blake were intrigued by the idea that the landscape is constantly changing.

A little Chinese market garden, deck chairs, and the “Edge of the Trees” installation drew us in and towards the entry. The exterior design is really engaging, and especially so for the kids. 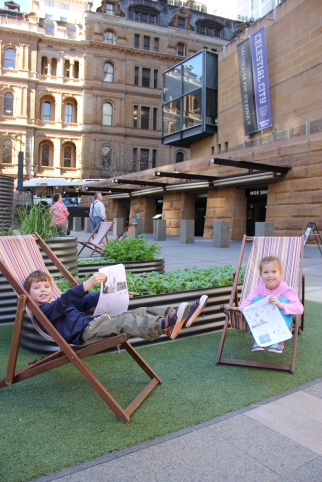 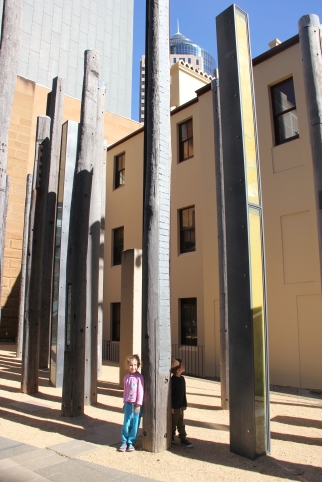 The foyer is just as interesting. I paid my $10 (the kids were free – take that, aquarium!) and we picked up our MoS Kids’ Guides. P and B were rapt. They had clipboards! And stuff to find! What kid could ask for more than a treasure “map” and the challenge of a search for buried treasure? A dog skeleton, a cannon ball, and a toothpaste lid are waiting to be found among bits and pieces of historical refuse from beneath our city streets, right under your feet as you enter. 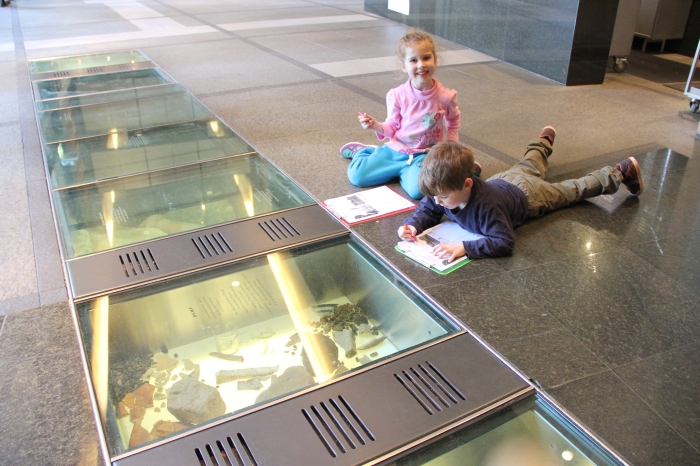 The painting below is a stop on the MoS Kids’ guide, and it really captured the imaginations of Phoebe and Blake. I try to talk to the kids as much as I can about the Aboriginal history of Australia, but it’s been difficult conceptually for them to understand the meaning of “Aboriginal”, and our migrant history. This artwork (I should have recorded its title – it’s beautiful) allowed us some meaningful discussion about the meeting of cultures, and indigenous history and culture.

The First Fleet is here in scaled model form. They’re brilliant pieces. We talked about the convicts chained below decks, the dreadful conditions on board, and the role our convict ancestors played in building this city. Phoebe and Blake don’t quite get the idea of ancestors just yet. They were most impressed by the number of ropes on the ships.

The absolute highlight might just possibly be… drawers that open, and light up! We were tasked to find: 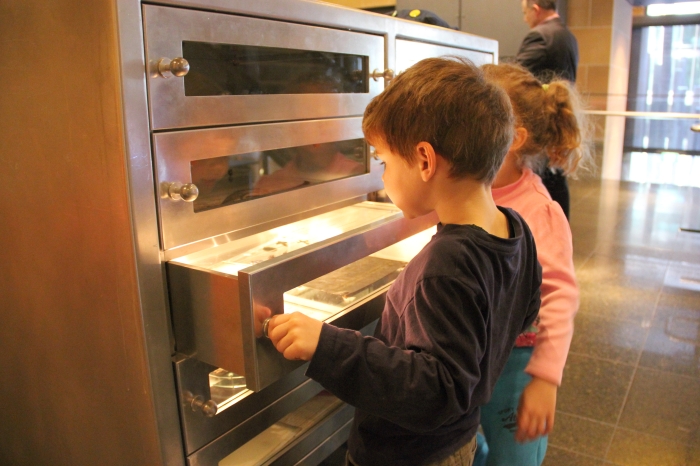 The video montage in the Gadigal Place exhibit, honoring the traditional owners of the land, was also a favourite, as was the replica bark canoe, which I omitted to photograph. Phoebe was impressed by the design, but adamant she would never try one out. (Her aversion to boats is documented here.) 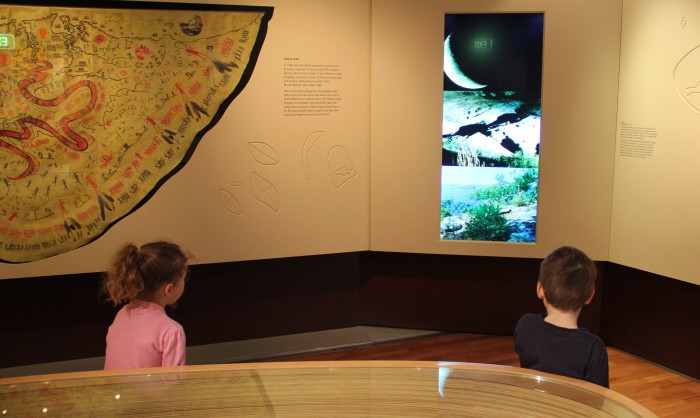 Sydney museums? MoS was a winner with my two. We easily spent a couple of hours lost in time, soaking up the history of our city and people, and unlike the big museums, we didn’t have to leave before we’d seen everything because “someone” had lost interest. (Someone always seems to lose interest and demand lunch, don’t they?)

Museum of Sydney, you get a big thumbs up from us! We’ll be back.

Check out our visit to the Art Gallery of NSW, and the Australian Museum, if you want more indoor adventures, or our outdoor adventures around Sydney if you’re up for some fresh air.

8 thoughts on “The Museum of Sydney with kids”