Growing up in the Sutherland Shire, we knew Kurnell proudly as the “Birthplace of modern Australia” – the place of Captain Cook’s landing in 1770, a place to celebrate the beginnings of our nation. Primary school excursions to Botany Bay National Park in Kurnell back in the 80s were always about, “well, this is where the white men first came ashore”, and “this is where the first white man died”, and “here is the creek where the white explorers got fresh water”, and “out there is where the Endeavour anchored for eight days, with all the white men aboard”. Maybe I’m exaggerating, but you get the general gist. I don’t remember any Aboriginal perspectives being discussed with us.

As a kid, I didn’t really notice this cultural skew. Visits were all about discovering the accomplishments of the explorers – the trials and tribulations of Captain Cook and the Endeavour’s crew. “This is where Australia started!” we shouted, in our childish ignorance. Aboriginal history was not important. Aboriginal voices were silenced. We couldn’t hear them over the nationalistic din in the lead-up to our bicentenary in 1988.

Thankfully, things have changed. Aboriginal perspectives have been part of the curriculum for some time, and are a cross-curriculum priority of the Australian Curriculum. Even the old Shire, tarnished by an ignorant minority with the racist ugliness of the Cronulla riots, now proudly proclaims itself as “Dharawal Country” on the multiplying signs that announce the passing suburbs. The cynic in me calls it political affectation; fancy gift wrapping. My inner optimist likes to think of it as a step in the right direction. I am one white fella who’s proud to live in Dharawal Country, and I want to know more about it.

Visiting Kurnell recently with my kids, I was pleased to find that the current narrative about the site of Cook’s landing is different to the simple single-sided version with which I’d grown up. Now re-branded (like the Shire itself) as Kamay Botany Bay National Park, which also takes in sites across the bay at La Perouse, the traditional owners of the land are recognised, and their voices speak alongside the monuments dedicated to the British figures of our European history. Today, the “birthplace” of Australia, the site of Captain Cook’s landing, is recognised, rightly, as a place of invasion, as a place that signifies the beginning of the destruction of indigenous culture – a place of ending, not just beginning. 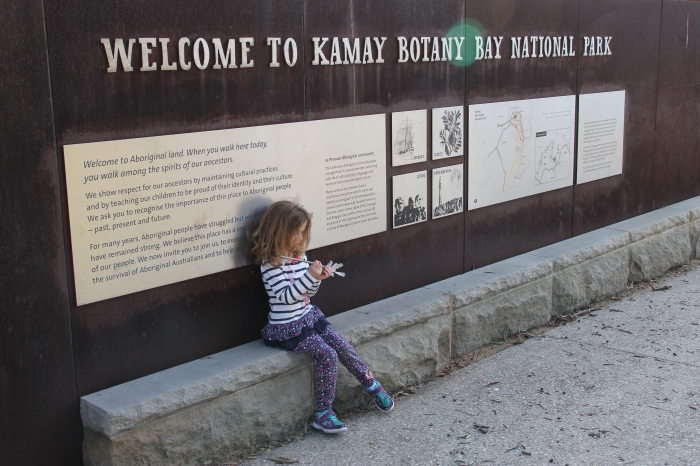 The good news is, this is not just lip service. Local elders were consulted in planning the current displays, and their stories collected and told. Their voices resonate. I’m not sure when these changes to the Kurnell story were made – I haven’t visited in a very long time, so I could be a a few years behind the times (don’t we all lose track of a few years when we have babies?) – but I’m glad that when my children visit the place in the future, they will find a richer, multi-dimensional history, not simply a blinkered representation of the past from a single perspective.

The Burrawang Walk is a 1km loop track that begins at the Kurnell Visitor Centre, where you’ll need to stop in and purchase your $7 park entry if you drive in. The Meeting Place is the first structure on the walk, and presents, in words and images, Aboriginal and European perspectives on the meeting between cultures.

The voices of local Dharawal and Gweagal elders are particularly powerful at the Meeting Place, speaking of an attitude to our environment that we would do well to heed today: 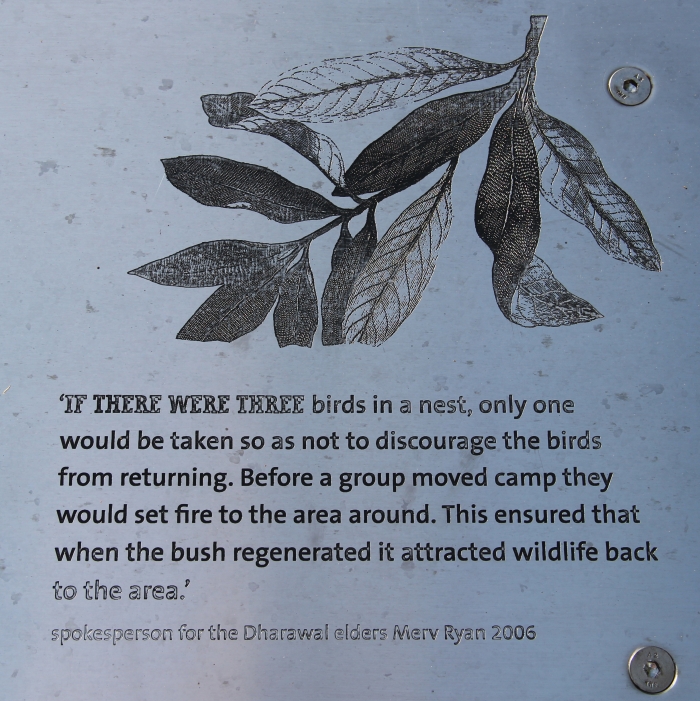 Burrawang Walk continues through the scrub, into a soundscape of Aboriginal language, singing, laughter, and music, before arriving on the waterfront and Captain Cook’s Landing Place monument. The obelisk was erected with much fanfare in 1870, to celebrate the centenary of Cook’s arrival. It’s a (particularly phallic) celebration of the achievements of a great seafarer and its prominence is a stark juxtaposition to the invisible indigenous ancestors along the bush track, fittingly evident only in voice, leaving no scars on the landscape.

The jetty just below Cook’s monument continues the story of the meeting of cultures, and provides both English and Aboriginal perspectives. Botanist Joseph Banks recorded a meeting between the Endeavour crew and two Aboriginal men in his journal:

They called to us very loud in a harsh sounding language which neither us or Tupia understood a word, shaking their lances and menacing, in all appearance resolved to dispute our landing to the utmost, tho they were but two and we 30 or 40 at least. In this manner we played with them for about a quarter of an hour, they waving us to be gone, we again signing that we wanted water and that we meant them no harm. They remaind resolute, so a musquet was fird over them. – Joseph Banks 29 April 1770.

One of the local men was hit by a musket ball, but he remained standing in defense of his land, shouting at the strange invaders to leave. Standing on that very spot, reading this account, gave me chills.

As an Australian of European heritage, I can’t but help feel a sense of guilt walking around Kurnell, rediscovering the past. Our indigenous people have regained their voices here, and their voices are haunting. It is a powerful place. Signs along the trail tell stories of Aboriginal families being ferried out of Kurnell into camps at La Perouse, removed from their land. Only on weekends could they return on the ferry and find freedom in their homeland. As each significant anniversary of Cook’s landing at Kurnell was marked by the unveiling of another large monument celebrating white “civilisation”, and the planting of another Norfolk pine, Aboriginal history was further silenced, the bush forced into retreat, and Aboriginal people further disconnected from their places.

Now, the Aboriginal flag flies beside the Australian one (although I wish it was a little higher), and indigenous voices provide their perspectives in response to the white ones. I’m glad there is a place locally where I can bring the kids to discover the history of their land: the European history is important, and so is the indigenous history. Both perspectives contribute to who we are today. Our children need to know how Australia came about, and the feats of the early global explorers.

But now, more than ever, our children also need opportunities to connect with our indigenous culture, because, in a time when the Earth is viewed as a resource to be plundered rather than a life-giving partner, Aboriginal voices can teach us much about living in harmony with our environment, and respect for the land. If only we’d listen. 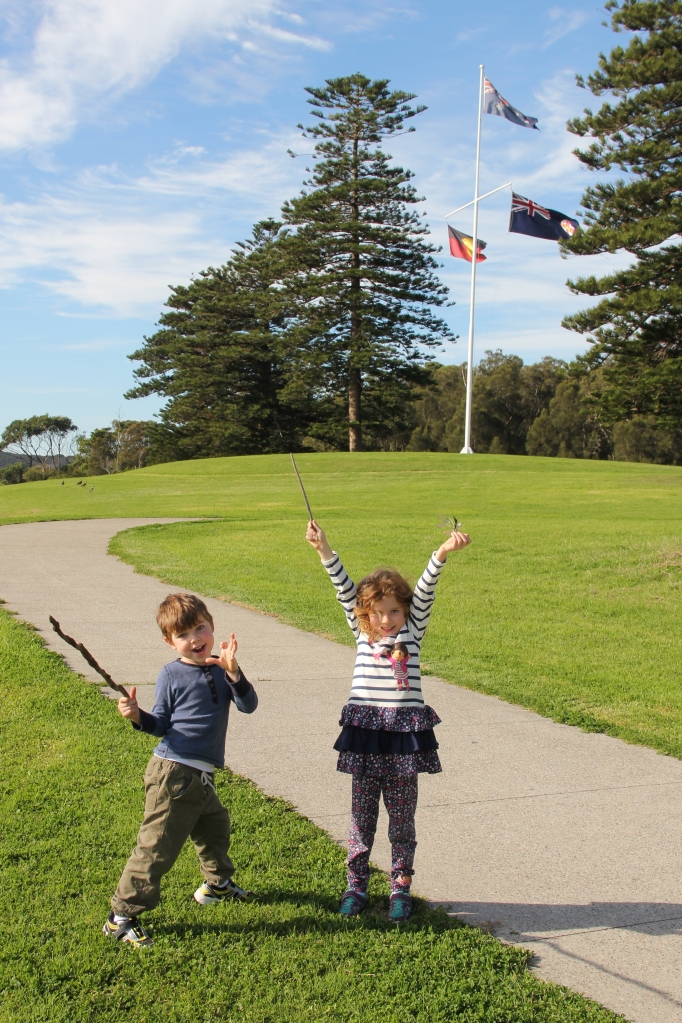