Rarotonga – where do I start? When you arrive at a small international airport at 1am and you’re greeted by a live performer on guitar, singing sweetly in the local tongue, you know you’ve found a pretty special place. Hustled through customs quickly because we had kids and it was past midnight (note to people without kids – make friends with some on the flight over for swift processing), we were greeted with fresh floral leis and a waiting minibus, which whisked us away to our villa on the beach.

If you’re not familiar with Raro – as the locals, and anyone here for more than two days (we’re practically local) like to call it – the island is the largest in the Cook Islands group, which sits in the middle of the Pacific, a three to four hour flight north-east of Auckland, New Zealand.

Before I go on, I am going to let you in on a little secret of Rarotonga, known only by me and the thousands of other people for whom TripAdvisor has replaced Lonely Planet as the travellers’ bible: WhiteSands Villas, in Titikaveka on the south coast of the island. And while that link there will take you to their website, let me just say that the photos do not do this place justice, for when we woke up, this is what we found. 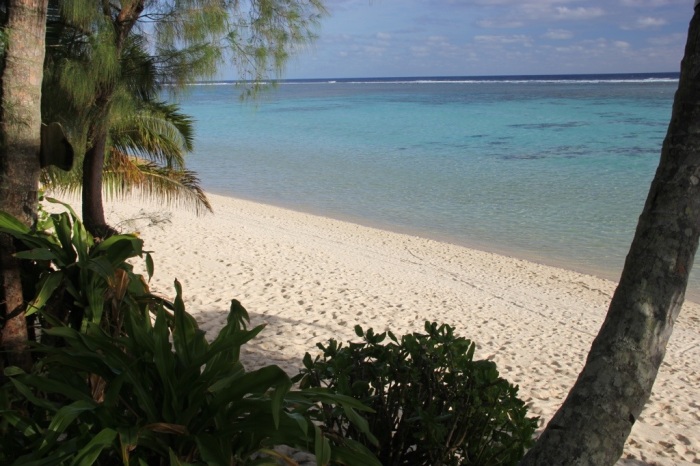 The villa at sunset.

If this is not the definition of paradise, I don’t know what is.

I’m sure there are many places of similar fantabulousness on the island, but I just want to take a moment to thank all the people who review stuff on TripAdvisor. You found us a gem!

If you’ve read about our past adventures (check ’em out), you know we don’t really go for resorts, so if you like a bar full of sunburned tourists within steps, a pool full of screaming kids on site (aren’t our own enough?), and an overpriced restaurant nearby, this is not the place for you. But if you’re happy to take the bus into town to get some meat and local veggies, and breakfast foods, then you can cook yourself a nice barbie in the evening (or, better, get your husband to) and dine watching the sunset. Then relax on the deck with your toast and cereal in your PJs in the morning.

Don, our host, organised our airport pickup, left a bowl of tropical fruit, and a slab (there is no better word to describe it) of freshly caught tuna in the fridge.

By the way, this post is not sponsored by Cook Islands Tourism – it’s just my new favourite place in the world.

A 32km road circles Raro along the coast, as the inland is mountainous rainforest. You can either take the clockwise bus, or the anticlockwise bus, but you’ll always end up in the same place. On our first bus ride into town – about 16km from Titikaveka – we managed to snag the clockwise route, with the happiest bus driver in the world. (And why wouldn’t you be happy, living here?) He opened the door as he passed tourists on motor scooters, shouting “Want a race!?” and then proceeded to grace us with a pretty impressive rendition of “Hallelujah” through his mic. The kids were enthralled. He set a bit of a standard, which, sadly, none of the other bus drivers we have met so far have rivalled, but look out for him if you go. 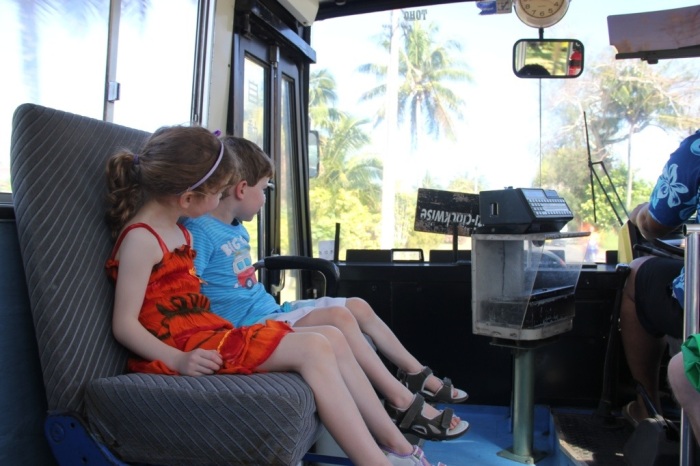 The Cook Islands use NZ dollars. There are plenty of ATMs around Raro. There are a couple of decent sized supermarkets in town, local grocery stores dotted around the island, and Prime Foods is great for meat and fresh produce. Ask for it in town. Raro even has its own brewery. We’re going there. Internet is available through the local Telecom’s wireless hotspots, so if you need it, buy credit in town and pick up wireless internet across the island. We paid $50 for 1.25G. The bus is $5 each way, and cheaper if you buy multi-trip tickets – just buy them on the bus.

Visit the local markets on Saturday morning in town for fresh local fruit and all your touristy knick-knacks and souvenirs. 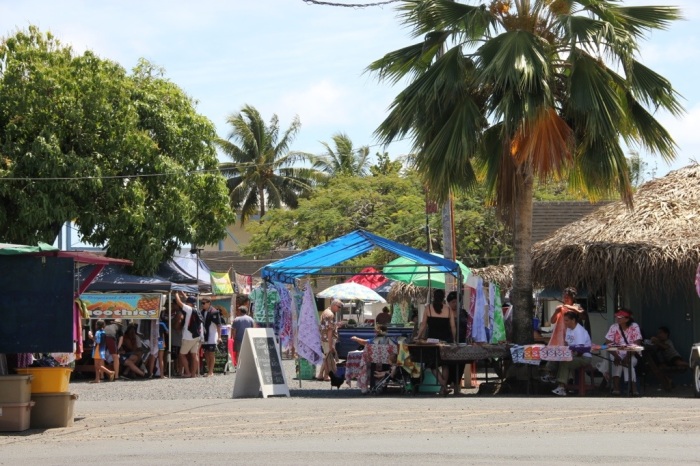 Catch a performance of local music and dancing on stage. 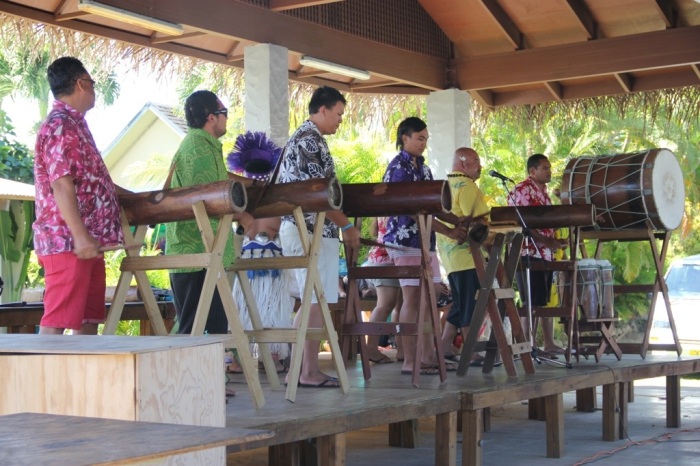 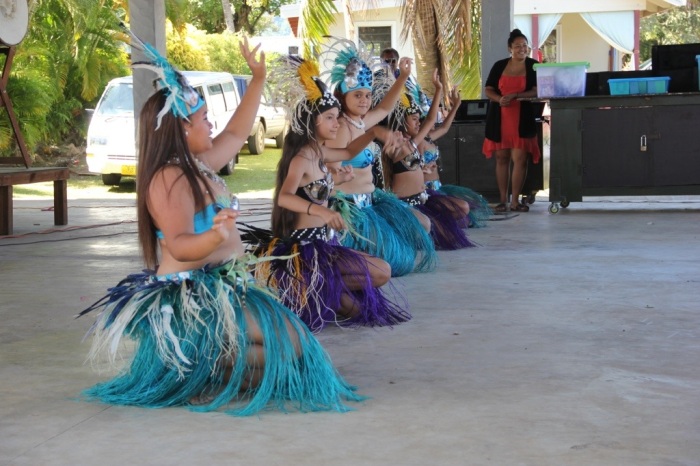 And grab some shaved ice. Mmmmmm. (Please ignore the polystyrene. It was just once, ok?)

Then, relax on the beach. 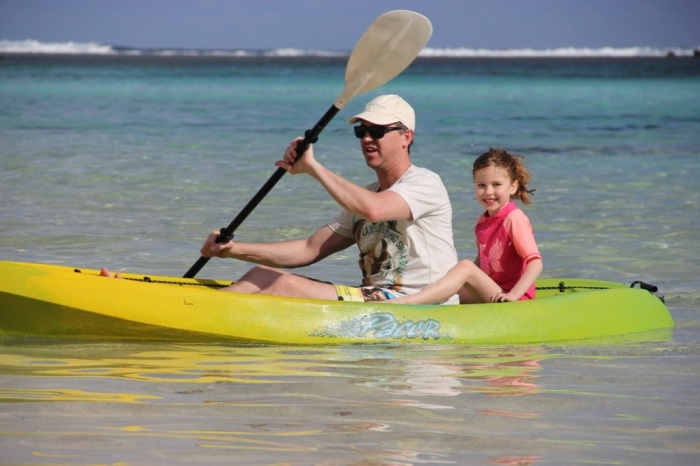 Swing on a vine. 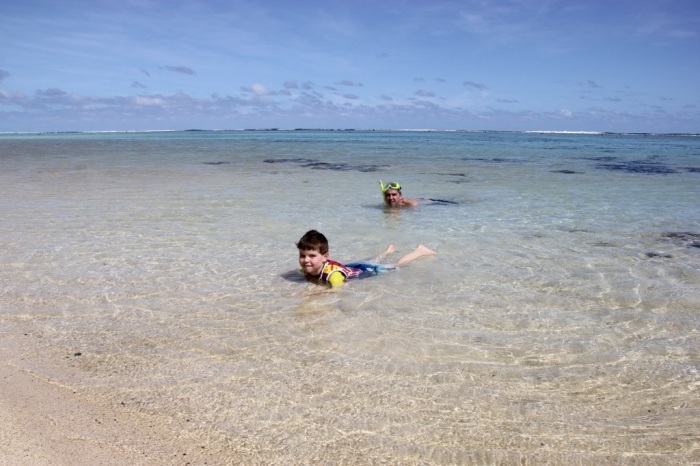 Yes. That was today! (Massive photo credit to Stephen.)

Plus, catch a sunset. 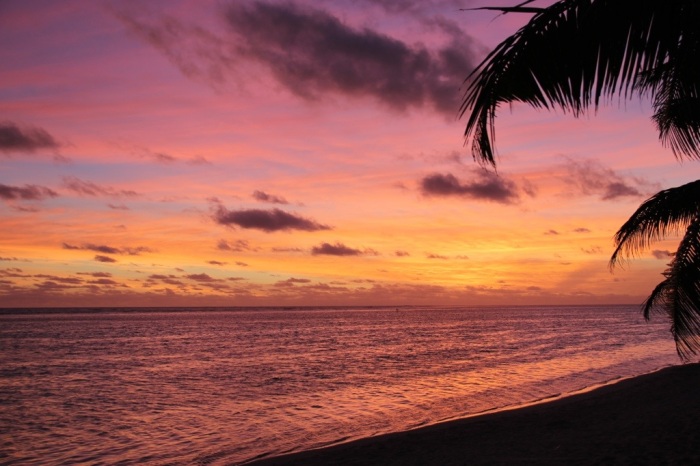 All of the above photos were taken in our first three days on Raro. Did I mention this was paradise?