The former royal capital of Laos, Luang Prabang sits at the confluence of the Mekong River and the Nam Khan (nam means water/river in Lao).

The city has a history reaching back to the 600s. Its power has waxed and waned over the centuries, from flourishing glory from the 1300s-1500s, to paying tribute to neighbouring kingdoms from the 1600s onwards. After being sacked in 1897 by Chinese “Black Flag” militia, the kingdom of Luang Prabang came under the protection of the French, who commissioned the colonial-style buildings in the old town, and used Luang Prabang as a favourite respite post. I can see why. 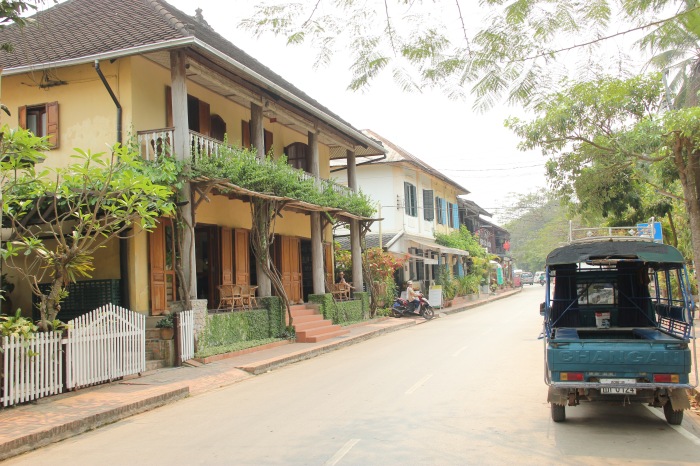 There is so much to see and do in and around Luang Prabang. We spent six nights here in the heat of April, as Laos sweltered towards the end of the dry season, and it was our absolute favourite place in Laos. My next few posts are going to explore the sights of Luang Prabang, starting with Phu Si.

Phu Si is the hill that sits prominently in the middle of town, rising (a very modest) 100m from its base. You can’t miss it. Here it is from across the Nam Khan.

We circled Phu Si on our bikes a number of times in our travels around town, and climbed its steps late one afternoon. We followed a pair of novice monks to the stairs. Luang Prabang, with its bounty of wats, is a spiritual haven for monks-in-training, many of whom come from remote villages throughout Laos. The Novices can be identified by their robes, which only cover one shoulder. Once they attain full monk status, both shoulders are covered by their saffron robes.

There are a few different paths to take. We entered via the eastern stairs, but you can also begin from the north-west, right opposite the Royal Palace. The gardens are bursting with colourful Buddhist iconography.

Buddha himself is said to have climbed Phu Si, and you can spy his footprint at the northern end of the path, sheltered by a little house. It’s difficult to photograph. Just imagine a dinosaur footprint. Buddha was big.

As you climb the stairs, note the drum that calls across the city each day. The wats throughout Luang Prabang often boom in unison as these heavy drums are struck – a spiritual call, even for non-Buddhists. 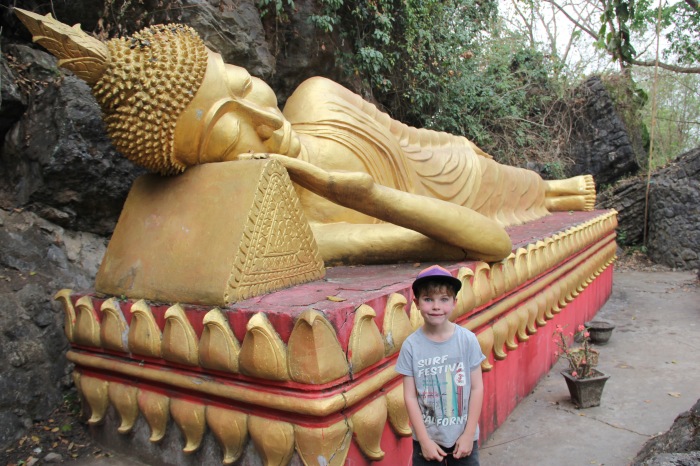 There really is an overwhelming abundance of Buddhas. This one has his own cheeky gecko (minus half a tail). 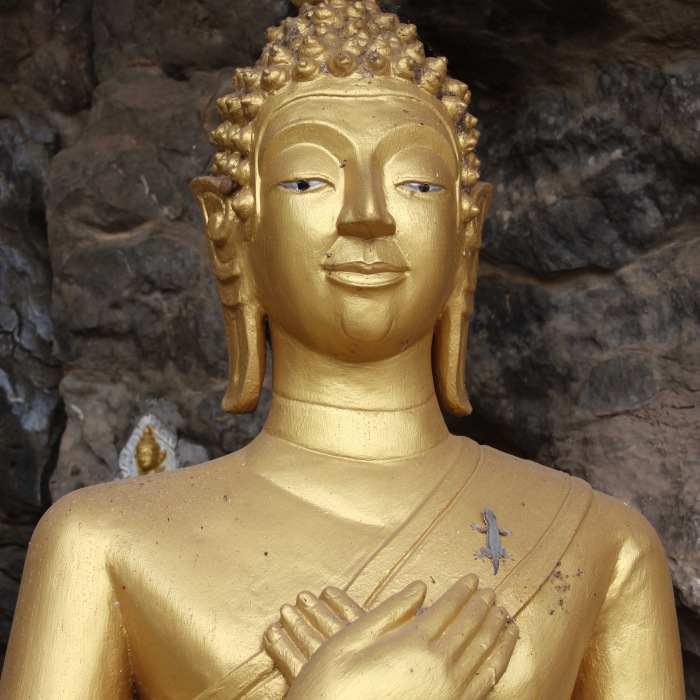 It will depend on the day as to the view you get from the top. If it’s a clear day, you’ll have a fantastic view of the surrounds. Northern Laos, however, is choked in haze during the months preceding the wet season as the poorer farmers, most of them Hmong people from the highlands areas, slash and burn forests to prepare for rice planting when the monsoon rains arrive. It was hazy when we reached the summit, so I didn’t get a great shot. This is looking back across the Nam Khan.

Sunset would be beautiful up here, if you could see the sun! This little guy was cute, though, perched on the highest point. (Phoebs wasn’t too keen on having her picture taken that day.)

We descended via the north-western stairs. The hill is covered with frangipani trees – they would be beautiful in full bloom!

At the bottom of the stairs is the stunning Wat Ho Pha Bang, which houses the Pha Bang Buddha – the 83cm gold alloy Buddha after which the city is named. The Pha Bang comes out only once a year for Pi Mai (Lao New Year), when it is paraded around the city on a gilt palanquin.

And THAT is a little afternoon walk up and down Phu Si.

And if you haven’t already, check out On the fly in Chiang Rai, Big Dreams in Huay Xai, Top 5 things to do in Huay Xai, and Slow boat on the Meking for more of our adventures in Laos.

7 thoughts on “In the footsteps of Buddha: Climbing Phu Si, Luang Prabang”