Leaving the Grand Canyon in our road trippin’ wake, we headed north, crossing the border from Arizona into Utah on Highway 89. Blake marked the momentous occasion with a photo.

Only about an hour from the border, driving into Zion National Park through the eastern entrance is spectacular, absolutely impossible to capture in photos and difficult to describe in words. Red and white sandstone canyon walls and cliffs tower overhead, at times craggy, at times smooth and rounded, like they’ve been created by lava flows. The road is narrow and it winds through the steep walls rising on either side of the road. There are a couple of tunnels that drill through the rock, before opening up into Zion Canyon, the base of which is reached by twisting through several switchbacks to the canyon floor.

Here is a little taste of driving through the smaller tunnel.

We stayed in the town of Springdale, which is the base most visitors to Zion use. Springdale sits right at the southern entrance to the national park. Our hotel was Driftwood Lodge, and it was luxury to arrive after five nights of camping to a comfy room and this view from our back patio.

The Virgin River, which carved Zion Canyon, flowed past just to the right of frame, and The Watchman, the pointed peak in the background, lit up beautifully at sunset. 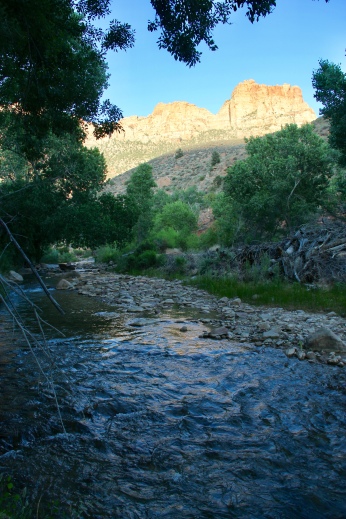 We only had one full day in Zion, and in the summer heat, this meant one chance for a hike. Temperatures were reaching 40C around lunchtime and staying up there until sunset, so we had to get out early. There are a bunch of different hikes to choose from. I would have loved to climb to Angel’s Landing, a rocky peak that provides an amazing view down the canyon, but there are some precarious sections that have drop-offs on both sides, and people have died slipping down there, so we didn’t want to risk the kids on that one. It looks like this:

And this is the view from up there – Zion is absolutely spectacular!

The Narrows is another famous section in the far north of the canyon, which involves wading through the river for much of the hike, and some cool slot canyon sections, but we weren’t equipped with the wet gear for that one. Instead, with less risk to life and limb, we decided to hike up to a spot called Hidden Canyon.

The thing about visiting Zion Canyon in the middle of summer, though, is that it’s absolutely jam-packed full of tourists. It’s the third busiest national park in the US, after Great Smoky Mountains in Tennessee and the Grand Canyon. And, since the canyon is so confined (as you can see above) and only one road goes in and out of the northern section, the park closes the road to private cars, instead running shuttle buses to the various viewpoints and trailheads.

We thought we were being very clever getting to the Visitor’s Centre at 7am for our early morning hike, as did the hundreds of other punters who were already in line for the early morning shuttles. We ended up waiting for almost an hour in a snaking line, like at a theme park. Ah, the serenity. Anyway, we finally reached the front of the line. Things were looking up. 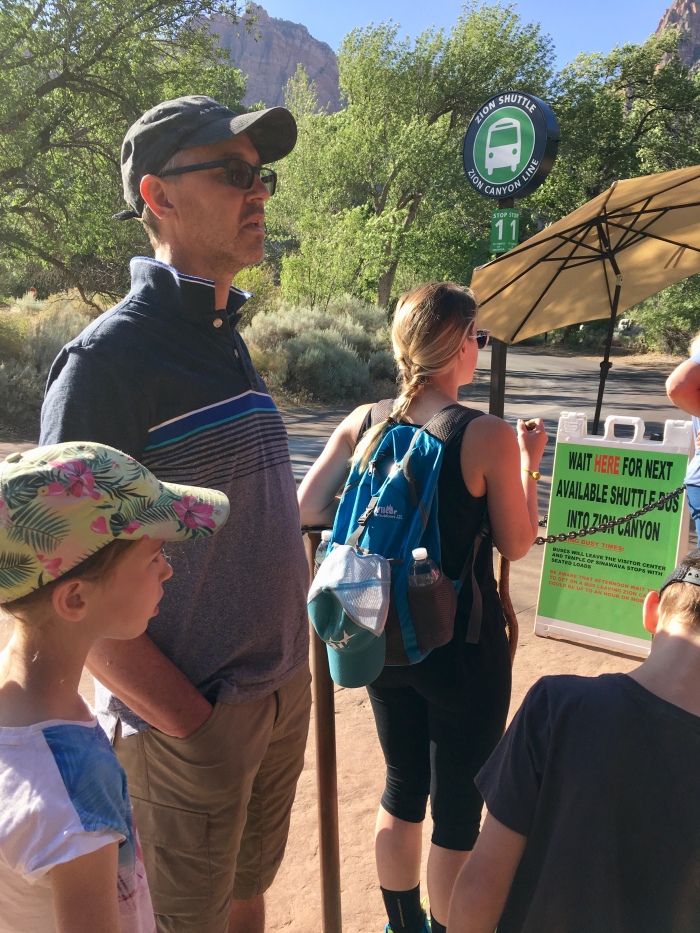 Although only a 3.2km round-trip, Hidden Canyon is classed as a strenuous hike, as most of it is steeply uphill. We began by climbing elongated switchbacks for a kilometre or so. Being early morning, our side of the canyon was shady and cool, which made the climb a little more comfortable. 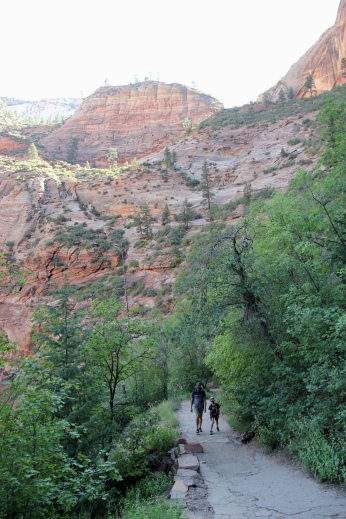 Then began a climb around a rocky cliff. The chains and narrowness of the elevated path scared away a few acrophobic hikers, but Phoebe and Blake were up for the challenge, hugging the cliff.

Around the corner, we entered into Hidden Canyon, a ‘hanging’ canyon, high in the cliff wall. From here, we scrambled for another kilometre or so through the thin canyon, over boulders, through holes and up well-placed logs. 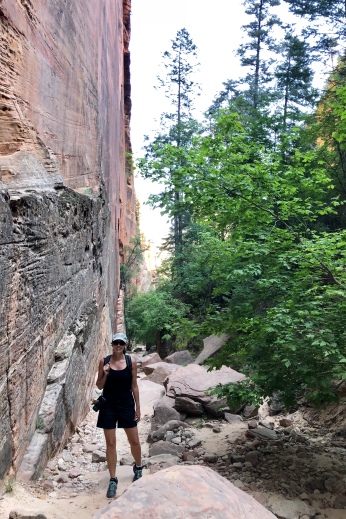 On the return trip, as we emerged from Hidden Canyon, the sun had reached the Virgin River below, making for a beautiful vista.

And the climb down was just as fun. 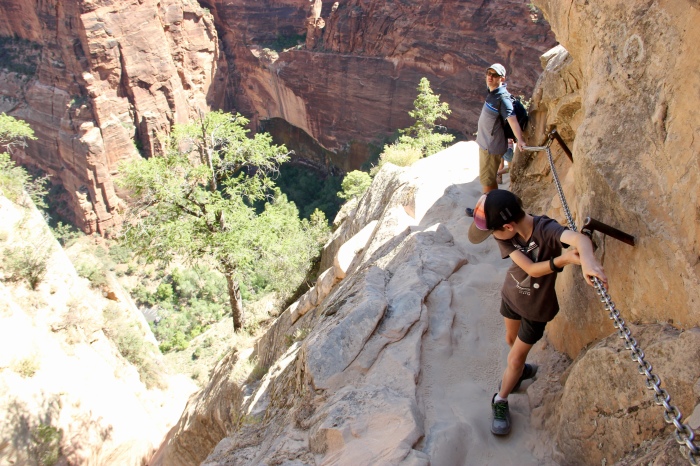 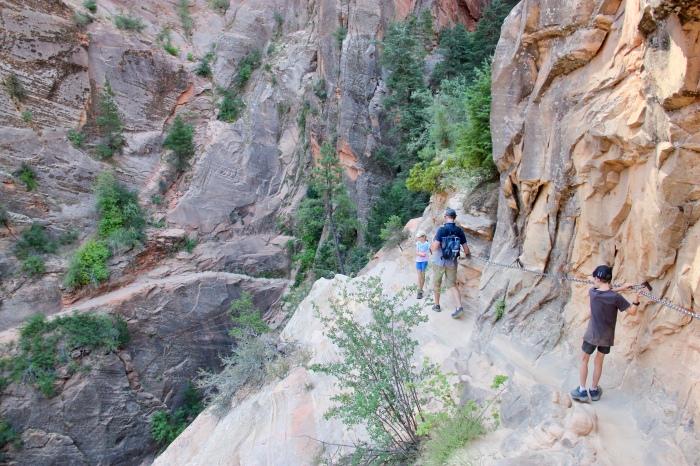 Blake spotted this squirrel, but I could only get a photo of its bum. 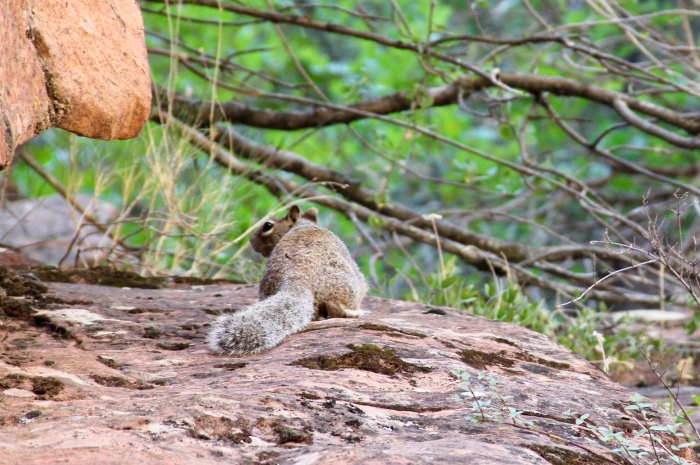 The kids had a little play in the creek at the bottom, which was teeming with little fish.

They got the biggest soft serves ever at the Zion Lodge, the only hotel inside the national park, a few shuttle stops away. 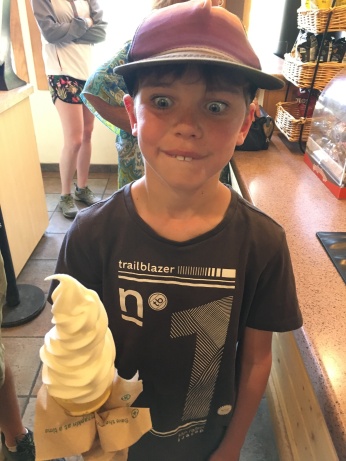 And we ate under the shade of this enormous tree. It was a gorgeous spot. Phoebe and Blake asked the tree how old it was, and apparently it told them it’s 237 years old. I’m not sure, but they seemed fairly certain. 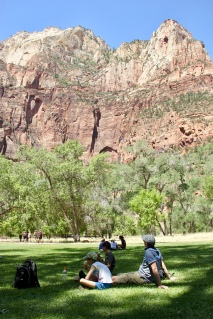 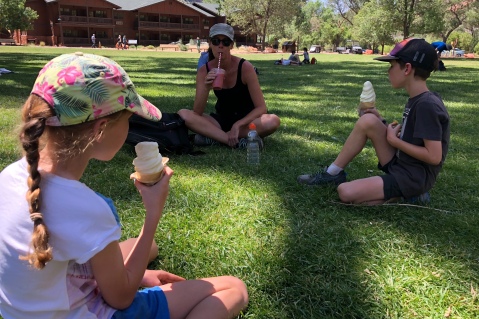 All in all, an action-packed day in Zion. The kids spent the rest of the afternoon in the hotel pool and we ate dinner at a funky local pizza joint.

Here’s a vid of our adventure:

Next stop: Bryce Canyon and Torrey, Utah, where we’re sleeping in an old-fashioned wagon.