About a two-hour drive from Bryce Canyon, we arrived in Torrey, Utah, the closest town to Capitol Reef National Park. The exciting thing about Torrey was that we stayed in an old-fashioned conestonga wagon! At the Broken Spur Inn in Torrey, rather than sleeping in a boring old motel room, you can sleep in a wagon – it’s basically a gimmicky glamping experience, but the kids loved it. 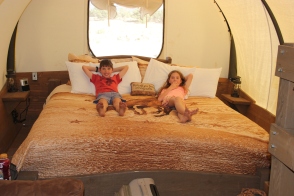 Inside there’s a fridge and a microwave, air conditioner and heater, a king-sized bed and double bunks. There are also extra power outlets and even USB charging sockets! Each wagon (I think there are eight) has a private bathroom in a little block just outside. Good fun!

The pool and the playground aeroplane were favourites.

We were lucky to catch the full moon rising over the desert. 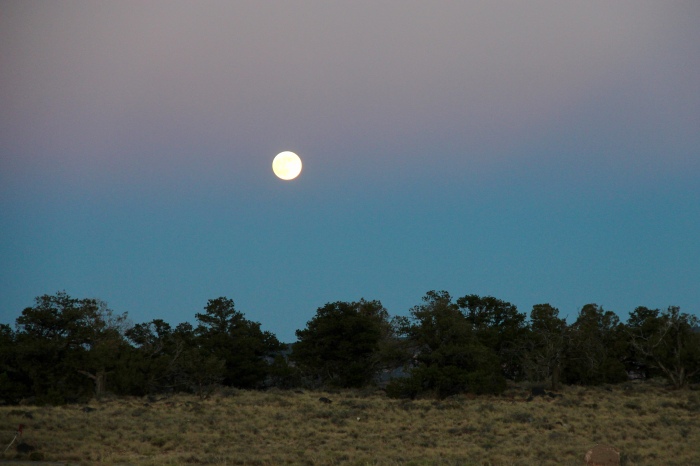 The next day we set out for Capitol Reef National Park, just ten miles from Torrey. They call Capitol Reef a ‘wrinkle in the Earth’. It’s situated on the Waterpocket Fold, a wrinkle in the Earth’s crust, or monocline – a fold in the rock layers caused by 200 million years of deposition of limestone, sandstone and shale in what were oceans, swamps and riverbeds, then uplift around 50 million years ago, where the rock layers folded over the fault line, and finally erosion, which sculpted the uplifted rock layers.

We took the Capitol Gorge hike since it’s only short and the day was already getting hot. It was two-miles return through Capitol Gorge, the fairly level floor of a slender canyon. The road to the trail head was amazing itself. We drove through the base of steep gorges with vertical walls towering overhead; a recommended drive, even if you don’t hike.

On the left wall not far after entering the trail are some petroglyphs – rock carvings made by the ancestors of the modern Hopi, Zuni and Paiute tribes who lived here between 300 and 1300. 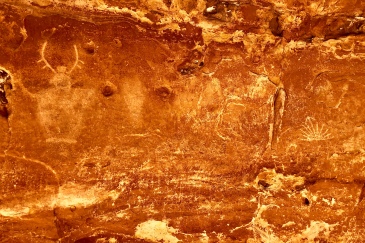 High up on the canyon walls are also reminders of the early pioneering Mormon settlers who established the nearby township of Fruita, located within the national park today, in the 1880s. 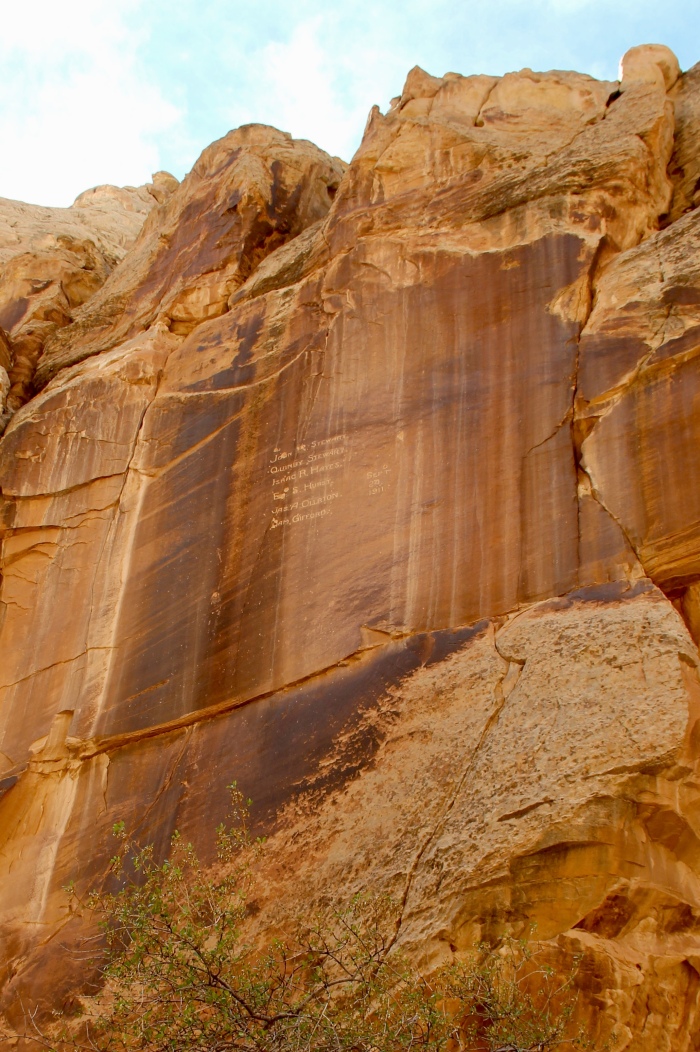 It was a hot dry day for walking. We sought shade where we could. 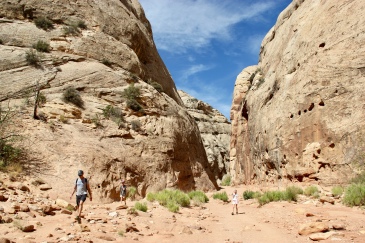 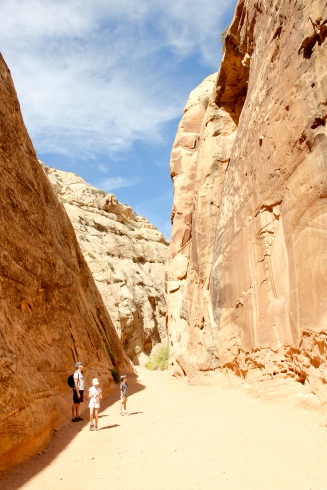 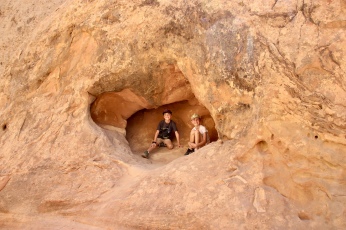 And it’s an even hotter, drier summer. A feature of this walk are ‘the tanks’ – a series of pools in a stream that usually retain water all summer and are a haven for life in this harsh environment. This year, the tanks are dry. 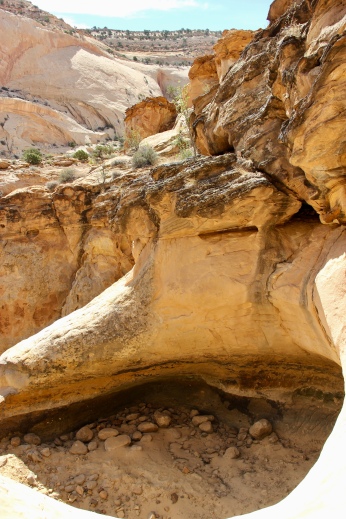 Only a tiny trickle of green water further up the streambed remained, sustaining this little lizard, and some fairly decent sized tadpoles. 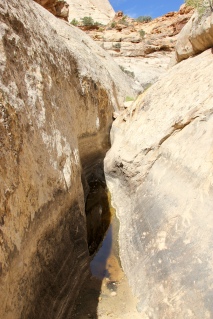 On the way back, poor Blakey hurt his ankle, so needed a little carry.

Our final stop in Capitol Reef before hitting the road for Moab (our next overnight stop) was the little Mormon township of Fruita, on the banks of the Fremont River that flows through the park. Established in the 1880s, Fruita was a fairly remote outpost so its pioneering residents had to be self-sufficient. It’s a beautiful little verdant green oasis of orchards and little grassy fields in the midst of the desert. The original settlers used gravitational irrigation very early on to sustain their community.

Gifford Homestead is a heritage building, originally built in 1908, displaying a little bit of history of the township, and selling delicious traditional wares. We bought the best homemade apple pie we’ve tasted.

Perhaps the most fun thing to do in Fruita is a little bit of fruit picking (yes – the town lives up to its name). When there’s ripe fruit, the orchards are generally open for visitors to head on in and pick some fruit. Apricots were in season for us, and we picked six pounds of them very quickly! 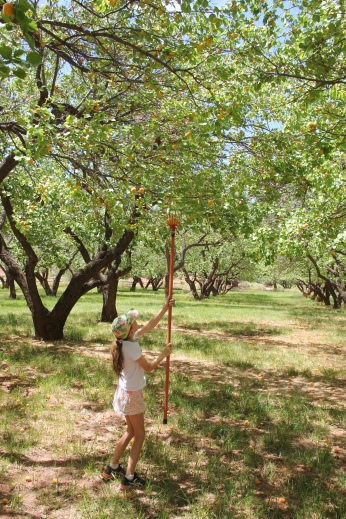 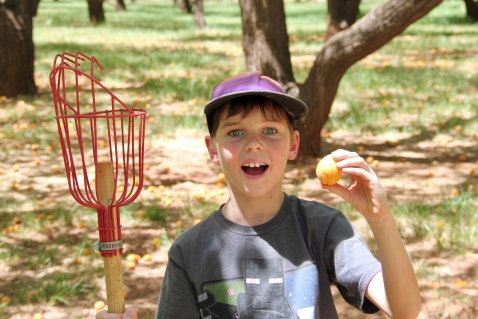 There were even some deer wandering through the orchard. 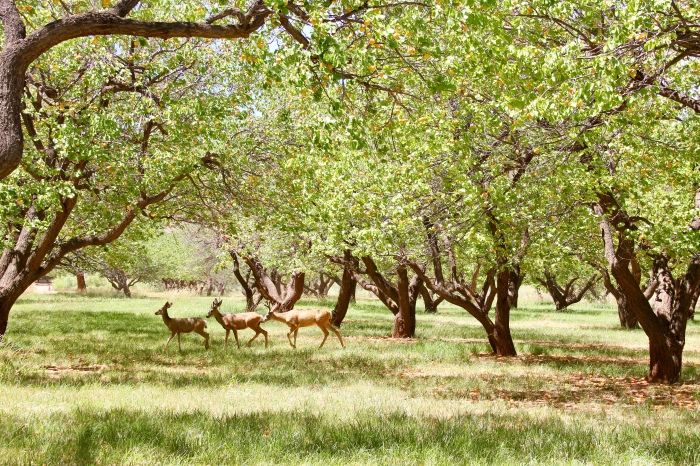 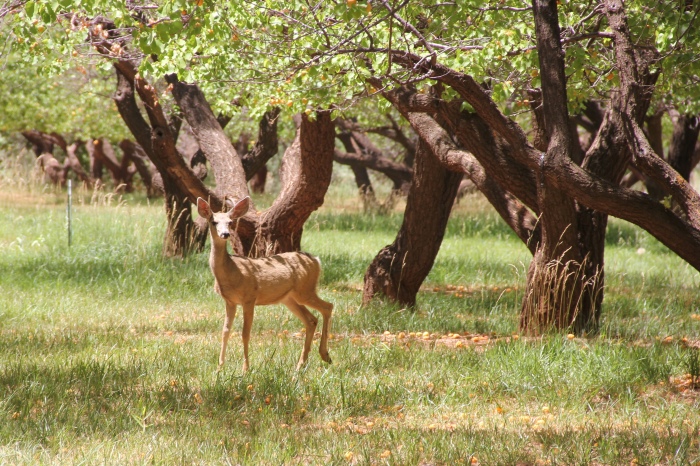 We purchased our pickings for $1 / pound. Too easy! Now to eat them all! 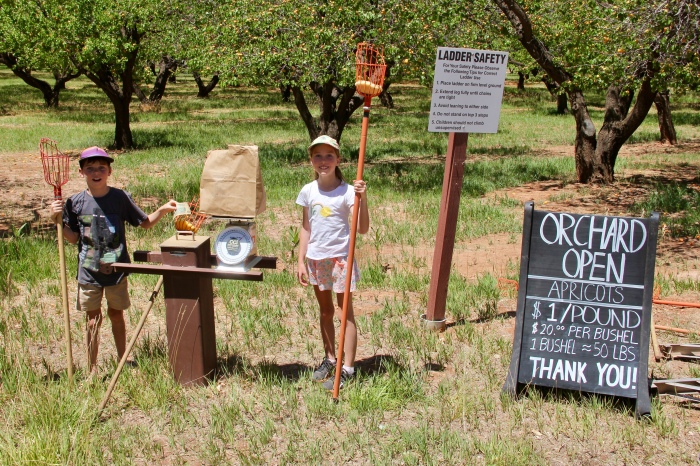 Mmmmmm! Bellies full of apricots, we hit the road.