Fewer visitors see the north rim of the Grand Canyon. It’s not quite as accessible as the south, but since our road trip was taking us north into Utah, we decided to spend a couple of days up on the north side and see the canyon from a different perspective.

Despite being only a few miles apart as the crow flies (or raven, in this case – most birds you’ll spot soaring overhead at the canyon are ravens) it is quite a distance around the east of the canyon between the two stops – a four-hour drive through the desert and then pine forests and meadows on the approach to the national park.

We left Mather Campground at about 9am. Our first pit stop was at Little Colorado River Gorge, located on Navajo Nation lands. Entry is via a donation to the Navajo Tribal Park, and Navajo people sell hand-made jewellery and traditional pieces at stalls on the walkway down to the lookout. I didn’t get a very good picture of the stalls, but the kids bought some souvenirs for themselves and their friends from the lovely Navajo vendors – bracelets, key rings, and Blake bought a cool little tomahawk. 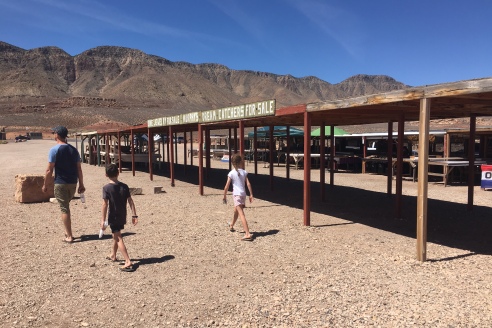 The gorge was dry, but there was a nice little view. 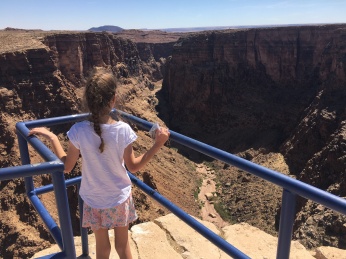 Our route took us via Marble Canyon, where we crossed the Colorado River for the first time. Phoebe was tired of stops, so she stayed in the car in the air con. 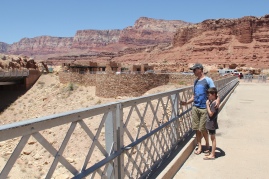 The Colorado River’s natural colour is brown, as a result of the silt that the fast-flowing water carries. The green of the water here is caused by algal growth. The slowing of the flow of the river downstream from the Glen Canyon Dam near Page, Arizona, allows the green algae to flourish. So, though it looks pretty, the river is not in its healthy natural state here.

On byway 89A we spotted a few little willy willies swirling up on the dusty plain (that’s the Aussie name for a little dust devil sand funnel) which were pretty cool.

As we climbed the mountains out of the desert, the landscape changed to the lush green of ponderosa pines as we entered the Kaibab National Forest. South of Jacob Lake, we drove through a wasteland created by a wildfire, which burned through in 2012 – a sober reminder of the reason for the current summer fire ban. The pines take a lot longer to regenerate than our Aussie eucalypts. This is six years after the fire.

Not having booked early enough to get a site in the North Rim Campground inside the Grand Canyon National Park, we set up camp at DeMotte Campground, seven miles north of the park entrance, then headed straight into the park, where we were met by this big guy! 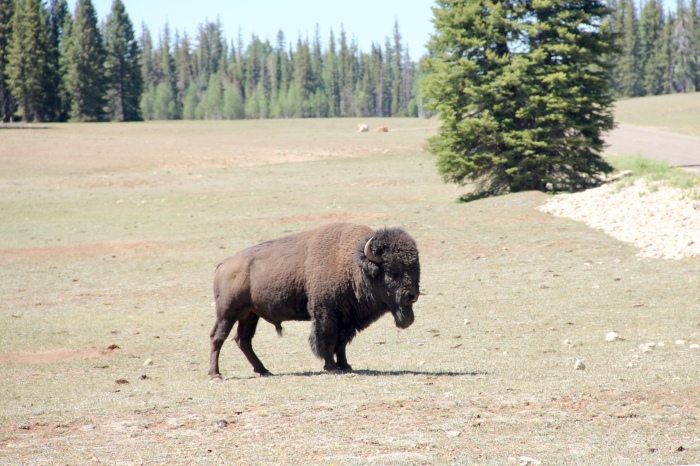 Blake was clearly impressed by our bison welcome.

This is the view from the Grand Canyon Lodge, the only hotel on the North Rim.

And this is from Bright Angel Point, just a short walk out from the lodge on a paved path. 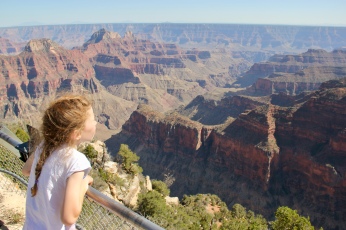 We took an afternoon drive through the national park up to Point Imperial, the highest point inside the park, at 8803ft. The red in the canyon walls was beautiful in the afternoon light. 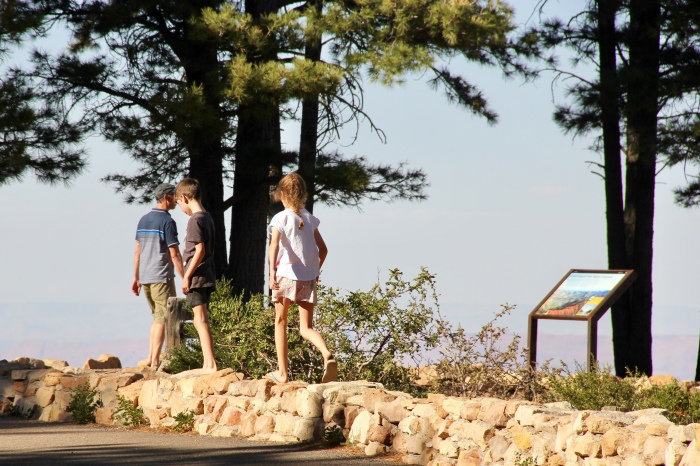 This is the best shot I could get of Phoebs.

Back at camp, we dined on frankfurts and pasta, and a local amber ale. Mmmmm… nutritious and delicious! There are no showers at DeMotte Campground, but you can use the coin showers down at the North Rim Campground in the park. 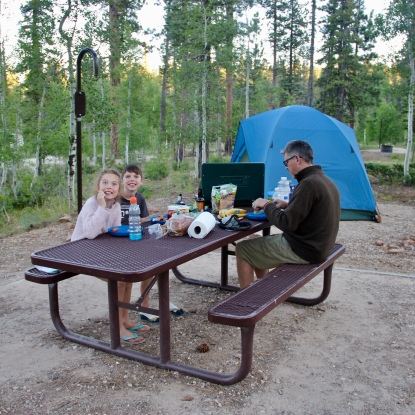 After a chilly night at almost 9000ft, we headed back into the park, this morning to be greeted by a herd of mule deer breakfasting on the meadow. 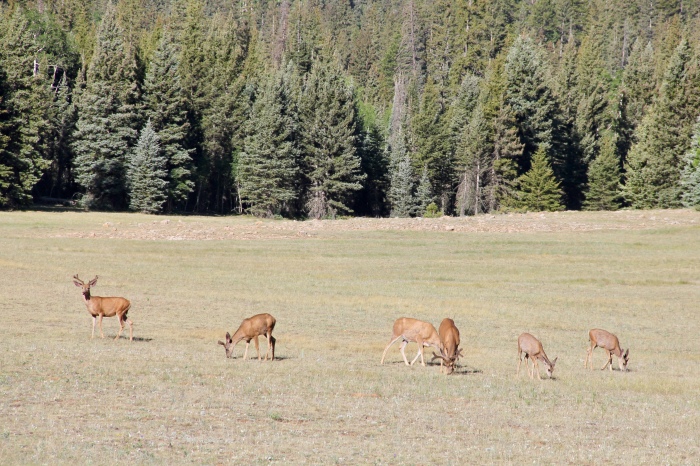 Phoebe and I took a mule ride along the rim, which, as you can see, she was just a little bit excited about. (Blake is a bit hesitant about horses since his last ride in Cuba on a horse that was a little bit ‘flighty’ – let’s just say he wasn’t quite ready to gallop.) 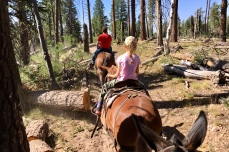 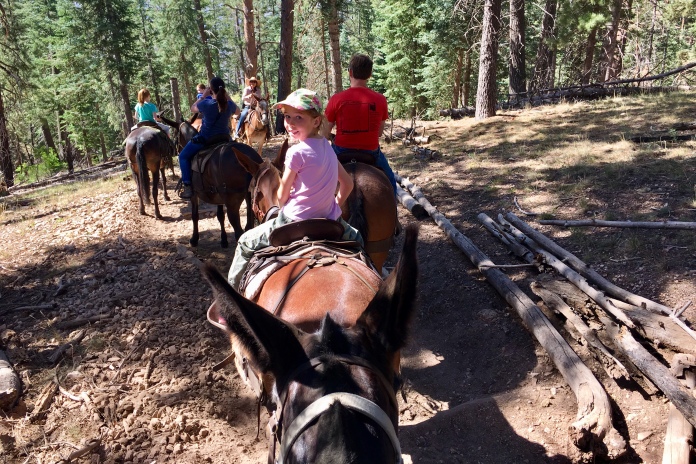 I made a little vid of our ride.

Still looking for adventure, we took a 7km round-trip hike out to Cape Final. It was a beautiful walk through a ponderosa pine forest. 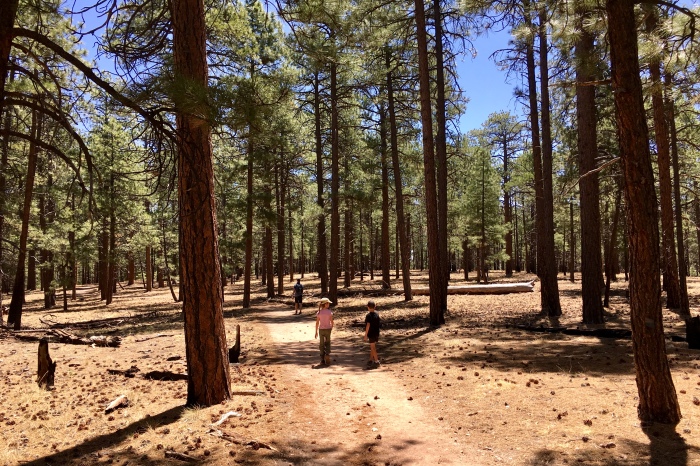 Which opened up to canyon views. There was so much to see!

The end of the track opens up to an excellent view at Cape Final right across to the Desert View Watchtower on the south rim (not really visible in these photos through the haze). 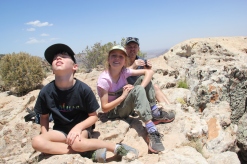 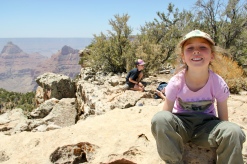 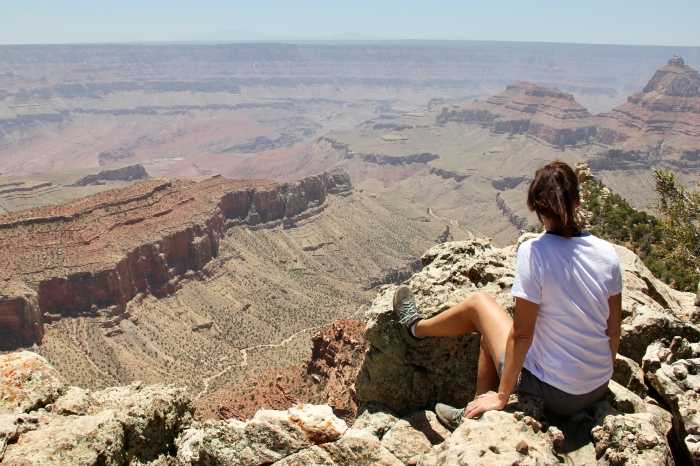 Just driving through the north rim park is spectacular – gorgeous green and blue in contrast.

And as we left the park for the final time, heading back to camp, we came across a whole herd of bison – with calves! 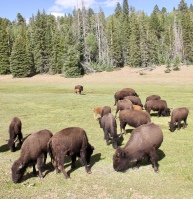 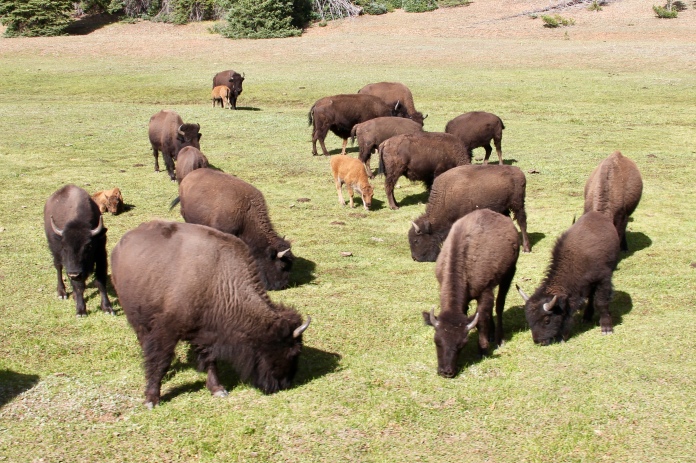 Two-minute noodles for dinner were a hoot, and we rugged up in preparation for another cold night in the tent. Brrrrrr – I was trying to escape winter, but it gets cold at night at 2500m elevation! 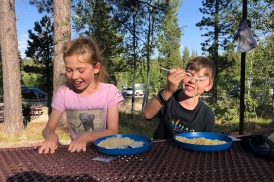 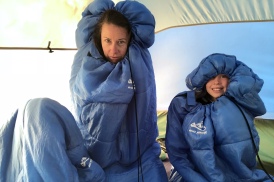 Next stop: Zion National Park, Utah – back to the desert heat!

3 thoughts on “Chillin’ on the Grand Canyon North Rim”