When we arrived at the Kurnell Visitor Centre a couple of weeks back, the ranger asked us if we were heading out to see the whales.

“Oh, the whales are migrating now?” was my reply.

“Yes, they’ve spotted a heap this morning. The volunteers are out there counting.”

For an enviro-chick, I feel a little embarrassed not to have known this. We’d actually headed out to Kurnell with another adventure in mind, to check out a bit of local history at Cook’s landing place (read about it here), but a spontaneous whale spotting jaunt sounded like fun.

We paid our $7 and piled back into the car for the short drive out to the point, where we found the Cape Solander Whale Count Command Centre.

OK, so it’s actually the Cape Solander Whale Migration Study Command Centre. It’s definitely a Command Centre. Those volunteers mean business. They’re binocular-toting pros. Watch out any amateurs who try to look in their Command Centre book! You’ll get a swift reprimand. (It wasn’t me, but some cyclists who missed the fact that the volunteers kindly provide a noticeboard to stop nosy tourists from looking in their very important whale counting book were curtly – how should I put this? – told off.)

We stood on the deck and squinted out to sea while one of the volunteers filled us in on the amazing action of the 33 humpbacks who’d passed by before our arrival. They’d been breaching and frolicking. It sure had been a sight to behold.

“Hang around, though, there are a couple more on the way, but they seemed to have gone to sleep.”

I pondered the sleeping habits of whales, and concluded that the nap was probably well-deserved. Antarctica is a long way away, after all, and the tropics still a way to go.

The lady told us to look out for “puffs” – an easy explanation of the appearance of whale spouts for kids – and went back to her counting book. We did that for a while, and ate some lunch. It was 10am, but whale spotting is hungry and draining work for five-year-olds. Sadly, not a “puff” was to be seen, so we headed out onto the clifftop to see if we could get a closer look.

Fortunately, the kids were far too interested in the geology of the cliffs to care that the whales were sleeping. 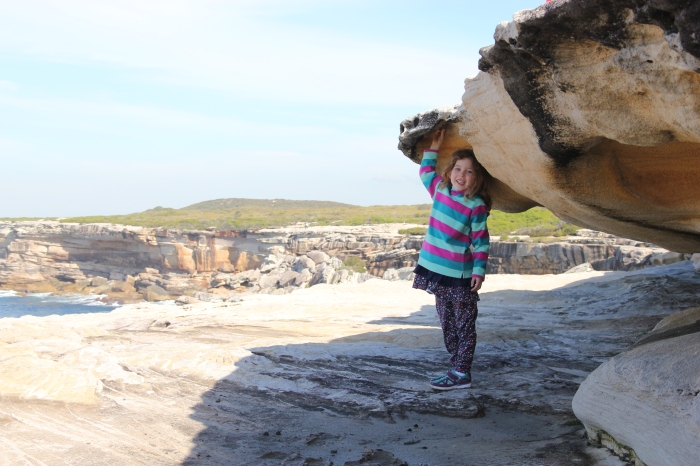 We played for quite a while, and I discussed sandstone formation in an inexpert, English-teachery kind of way. I was lucky enough to catch a glimpse of a few passing humpbacks while Phoebs and Blake were playing, but the kids weren’t really interested when I announced the whales’ arrival. I guess a couple of black lumps in the distance are just not as exciting as a cliff cave. This is my money shot. Hmmm… I don’t think It’ll make the news.

It’s important to acknowledge the great work done by volunteers all along our coastline tracking the whale migration. They do an important job. You can try to catch the northbound humpback migration from April to mid-August, so now is a good time to go. The best onshore sites to whale watch around Sydney are:

On the day of our expedition, the famous albino humpback, Migaloo, passed by Sydney. I think it’s clear that we didn’t see him. He came by after we left.

That’s nature, isn’t it? We can’t tame it, or predict it.

… But we learned about sandstone. Bonus.