We were well overdue for a family adventure when school holidays rolled around last week. Our twins are halfway through their first year at school, and I’ve had two crazy terms in a new teaching job, so a little escape from the daily grind was in order.

In our typical last-minute fashion, we found a little deal online at Hawks Nest, a sleepy coastal village only a few hours north of Sydney. Hawks Nest Beach Caravan Park was offering five nights for the price of four in a family cabin, with a whale watching cruise thrown in. It was too good to resist!

Port Stephens is a prime whale watching location – one of the many stops on the humpback migration super-highway up the NSW coast in winter, as the whales head north to breed. Humpbacks typically undertake an average 5000km migratory journey annually – one of the longest of any mammal. I’ve written about whale watching off Cape Solander in Sydney if you want to check it out.

Hawks Nest sits on the northern headland of Port Stephens, bordered on the east by the ocean, Myall Lakes National Park to the north, the Myall River to the west, and the Yacaaba Headland, part of the Myall Lakes National Park, and Port Stephens to the south. Tea Gardens, Hawks Nest’s similarly tranquil twin town, is situated just across the Myall River and connected by the Singing Bridge.

Our whale watching trip, organised by Tracey from the caravan park with Tamboi Queen Cruises, began with a hour’s ferry ride from the jetty at Hawk’s Nest through oyster farms and past the mangrove forests of the Myall River estuary (the red line above shows our route) across to Nelson Bay on the southern shore of Port Stephens. Whether you are going whale watching or not, this leisurely ferry trip is a fun little outing, and a local pod of bottlenose dolphins are often spotted along the way.

Some of the locals 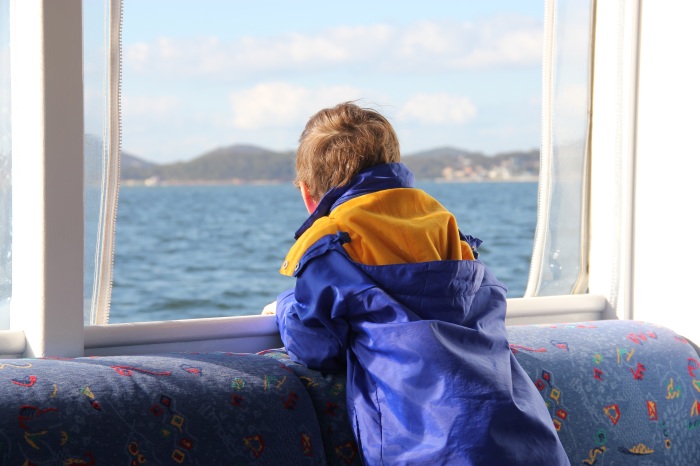 And no sign of Miss P’s boat phobia! (Could be because we didn’t need a lifejacket – you might like to read about our amusing boating adventures in Borneo and Montague Island.)

From Nelson Bay, we boarded Tamboi Queen’s catamaran, the MV Spirit, and headed out. 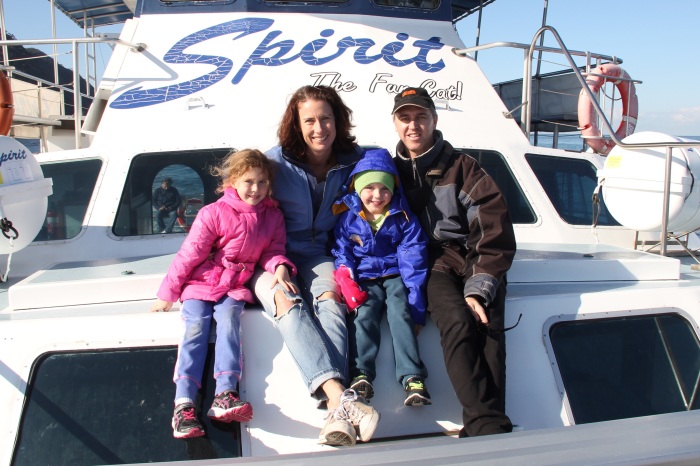 The whale watching vessels cruise out of the heads at Port Stephens, and past the inner islands just off the coast. It wasn’t long before we spotted a couple of humpbacks.

The dive times of this pair were quite long, so it was difficult to keep track of them once they submerged. Another duo popped up in front of the boat, and we caught a nice view of their tails before they disappeared.

There were some breaching whales in the distance, but we didn’t catch any up close (which was unlucky, as they’d caught them breaching and doing all manner of acrobatics in the days before we went out, and in the days following, but that’s nature).

Passing by Cabbage Tree Island’s seal colony on the way back was a highlight for the kids.

Can you spot the seals?

As was the pod of dophins who said hello as we re-entered the bay. 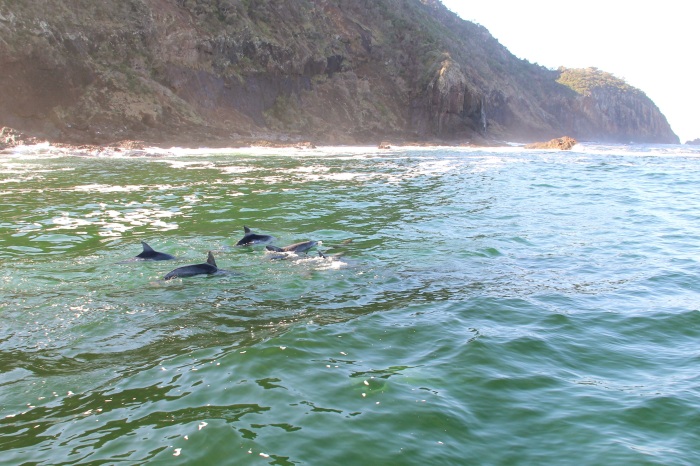 The faces tell it all – it was a fantastic day out for these land lubbers. Despite some early misgivings in the swell, we survived! 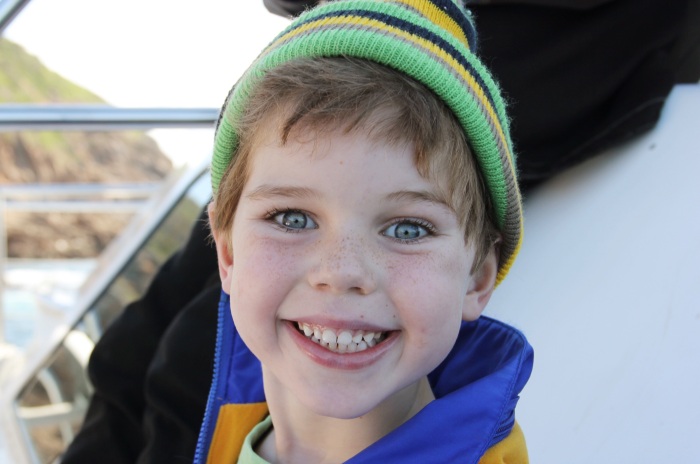 We can recommend the crew from Tamboi Queen, working out of Nelson Bay. We were lucky to stumble across them in our accommodation deal. (Special mention to Yui who helped out with the kids.) Check them out on Facebook.

Hopefully we’ll make it back one day to catch some breaching action!

3 thoughts on “On the whale trail: Port Stephens whale watching”