Crowdy Bay National Park stretches along the NSW coast north-east of Taree, from Harrington in the south to Laurieton in the north.

To be honest, I’d never heard of it before my brother-in-law suggested it as a possible camping location a couple of weeks ago. We hadn’t booked anywhere and wanted to get away in the tent with the kids, so a cheap and rustic national park campsite seemed like the best option to find a spot to stay for a week in early January, when most caravan parks up and down the coast are still filled to the brim.

It was a great find! There are a few campgrounds in the park, but the three main sites sit in the area around Diamond Head.

Diamond Head Campground is the most developed. It’s on the beach to the north of Diamond Head and the campsite has marked sites, flushable toilets (a luxury around here), cold showers (not so luxurious), and online bookings. That one was a no-go for us as it was completely booked out for January.

We opted for Kylie’s Beach Campground, which sits on the south side of the headland. First-come, first-served, Kylie’s is a grassy little haven behind the beach. Paradise – as long as you don’t mind cold showers and pit toilets. We set up camp in a shady little corner near the track to the beach. 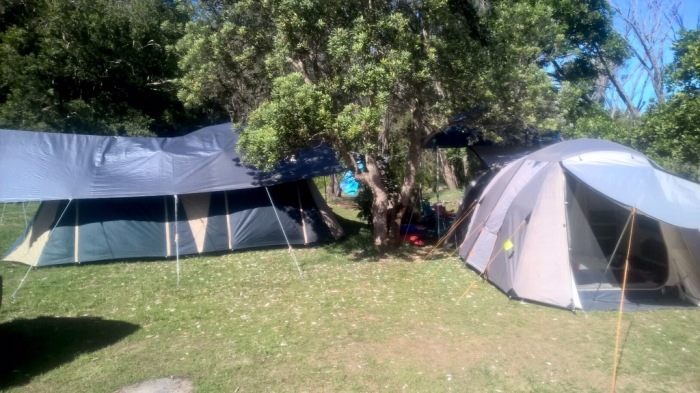 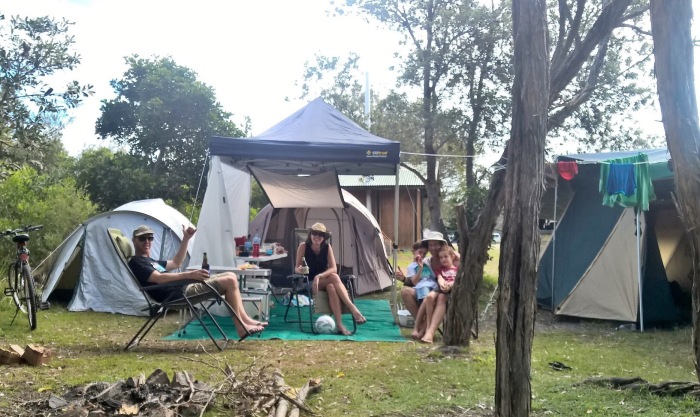 The whole area is flat and there is plenty of room to avoid feeling cramped. The local roos aren’t shy, either. 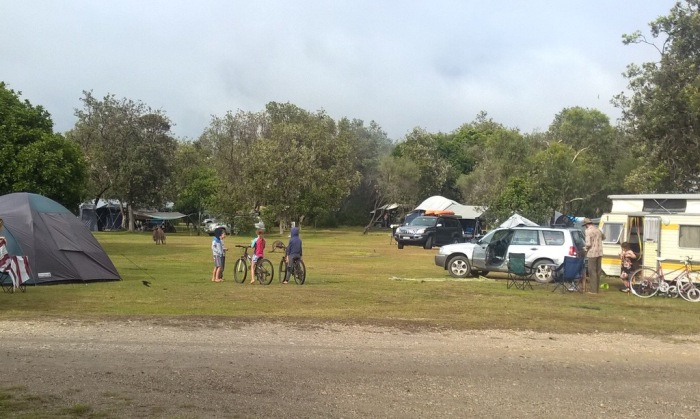 And there’s nothing like the smell of woodsmoke in the evening, is there?

The beauty of the area is that Laurieton is only a ten minute drive north, so you’re never far away from supplies. There’s no drinking water at the Crowdy Bay campsites, so Laurieton is where we filled up when we needed to.

Australian writer Kylie Tennant spent eleven years in Laurieton as the schoolmaster’s wife. During this time, Kylie met Ernie Metcalfe, a bushman who lived and grazed cattle up on the headland. He inspired her novel The Man on the Headland and he helped her to build a hut on Diamond Head, which she used as an author’s retreat. The hut is now an important cultural site in the national park, and is just a five-minute walk from Kylie’s Beach Campground along Metcalfe’s Track, in the middle of a little walk-in camping area. Campers can use the hut during the day – a tranquil spot to shelter from the elements.

From Kylie’s Hut a trail connects to Indian Head Campground, a quiet grassy area in the middle of the headland, and then to the Headland walk – a 5km loop track.

The view south extends all the way to Crowdy Head in the distance. 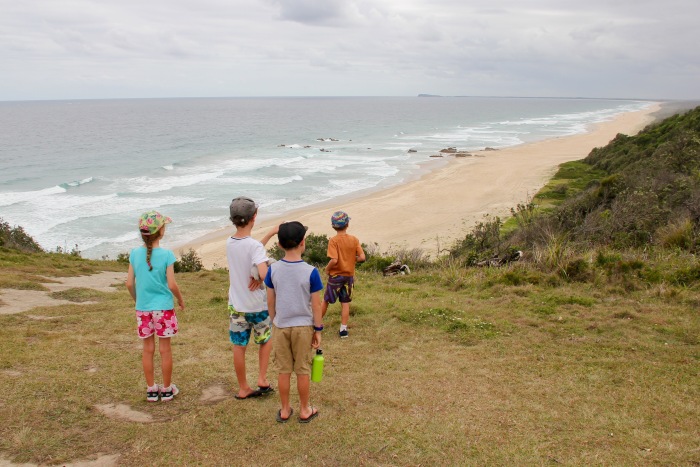 There’s a natural arch just off the headland. We took a detour off the main path to take a closer look.

After you reach the summit of the headland, the view north of Dunbogan Beach is expansive.

The forest walk loops back through the scrub to the Indian Head Campground. 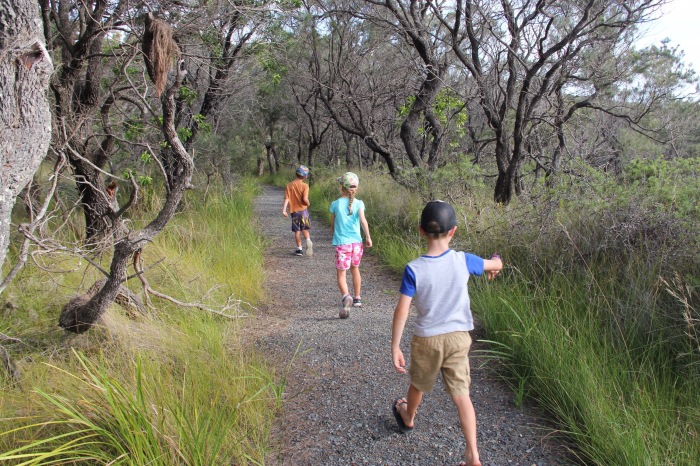 3. Exploring the rocks at Diamond Head

From Diamond Head Campground, scramble across the rocks around the headland at low tide. We followed a bunch of people with flippers, wondering what we’d discover.

There are some impressive vertical cuttings through the rocks to explore. 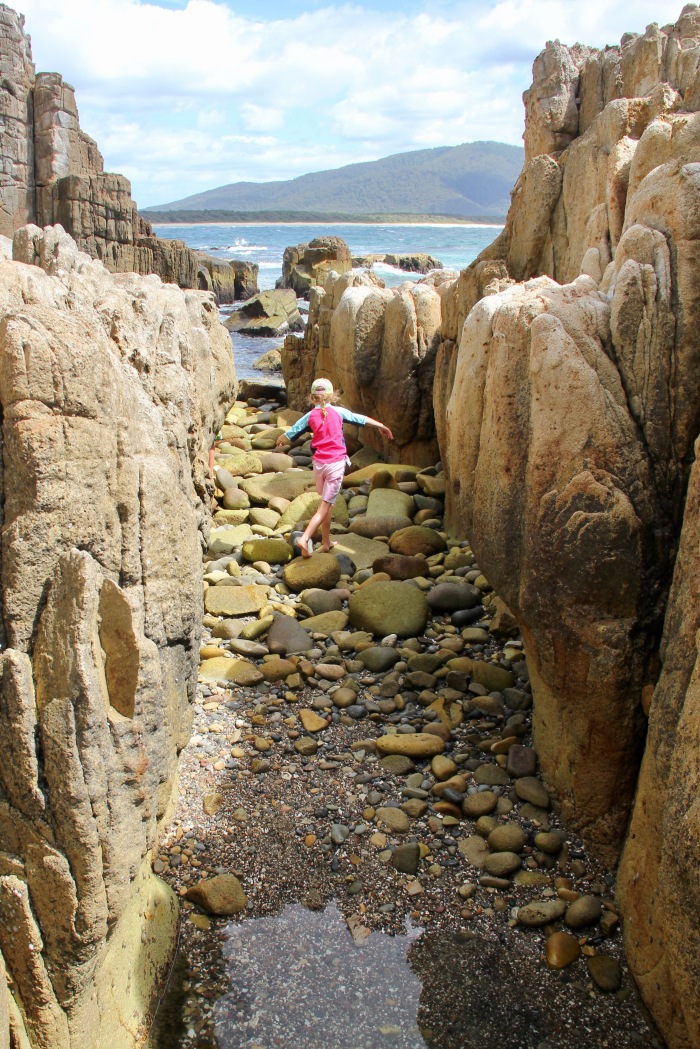 And a little bit of climbing to be done…

This was where the snorkelling was at – if only we’d brought our gear! 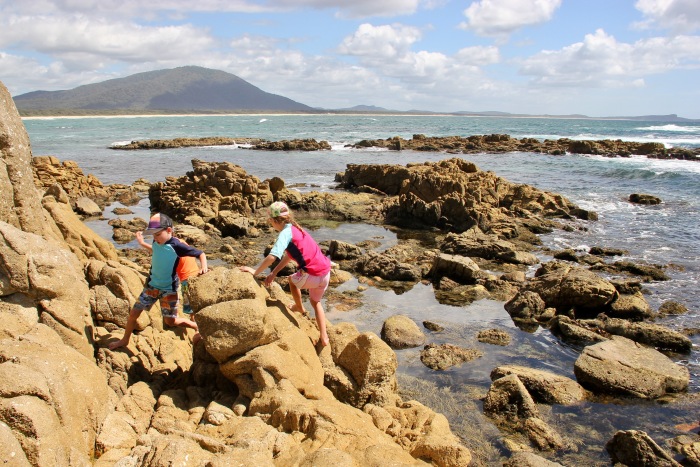 There’s more scrambling to be had at the northern end of Kylie’s Beach. 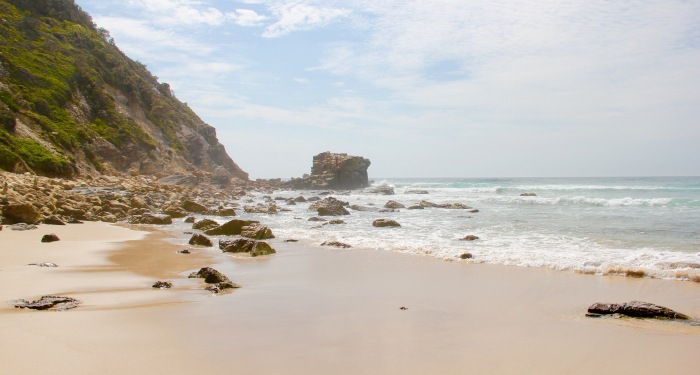 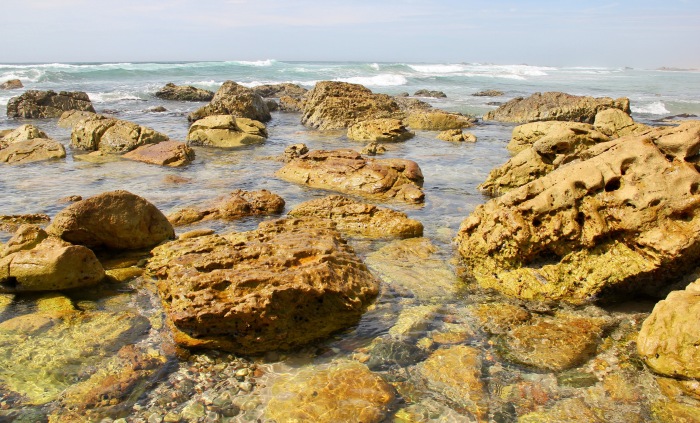 But most spectacular was the sea star paradise we discovered here!

There were too many to count! Here are some of our favourites: 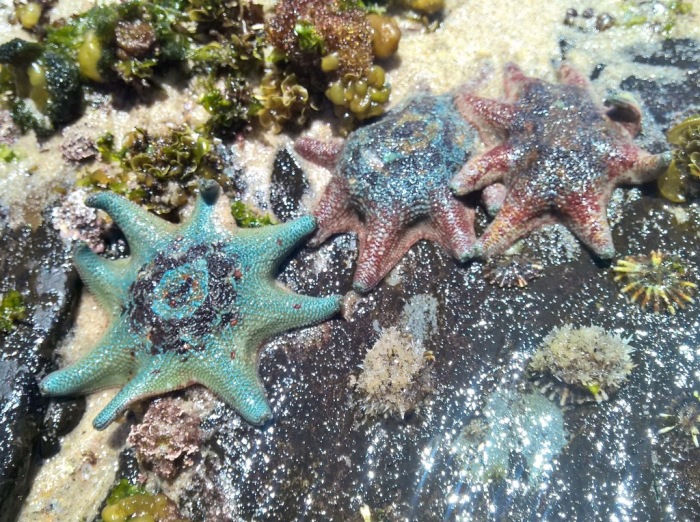 Depending on which way the wind is blowing, choose between Kylie’s and the beach at Diamond Head Campground, which is the southern end of Dunbogan Beach. We headed over there when the wind was blowing from the south as it’s protected from the breeze and there were some nice little waves for the kids.

My nephew practised his surfing skills.

It was perfect even on an overcast day. 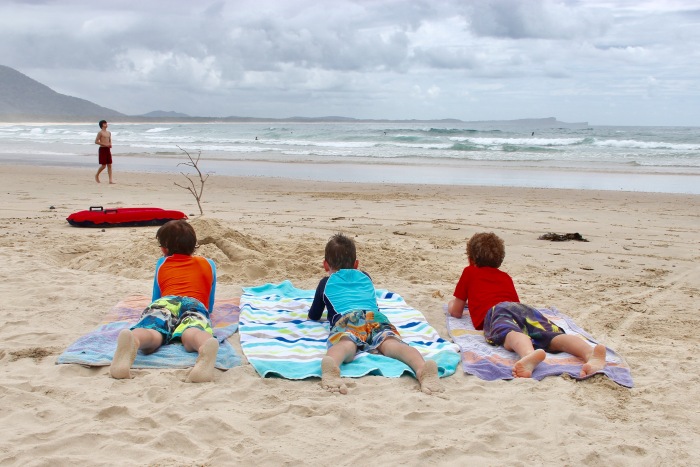 Over at Kylie’s, a rougher spot for swimming, we had fun on the sand ledges. 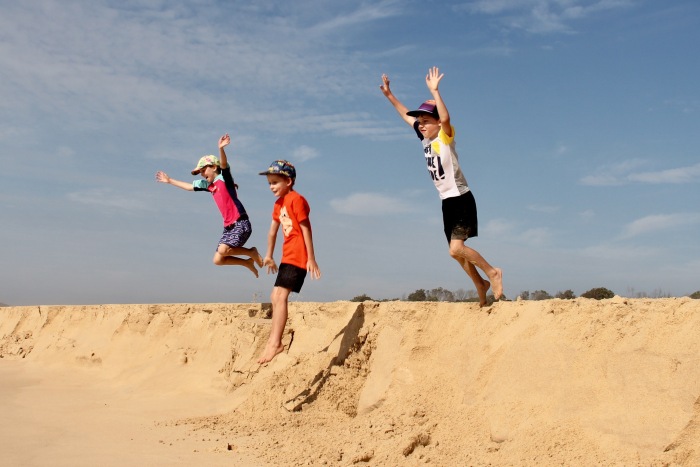 And even spotted some surfing dolphins.

There are koalas in the trees around Kylie’s Beach Campground, though we didn’t see any. There were plenty of goannas, so keep an eye on your meat.

Black cockatoos circled over each day, we spotted an echidna on the coast trail (though by the time I got there with my camera the kids had scared it away), kangaroos were regular visitors, and we avoided a couple of snakes in the campground.

Of course, there’s nothing better than relaxing around camp. Much of the time, you could find me like this: 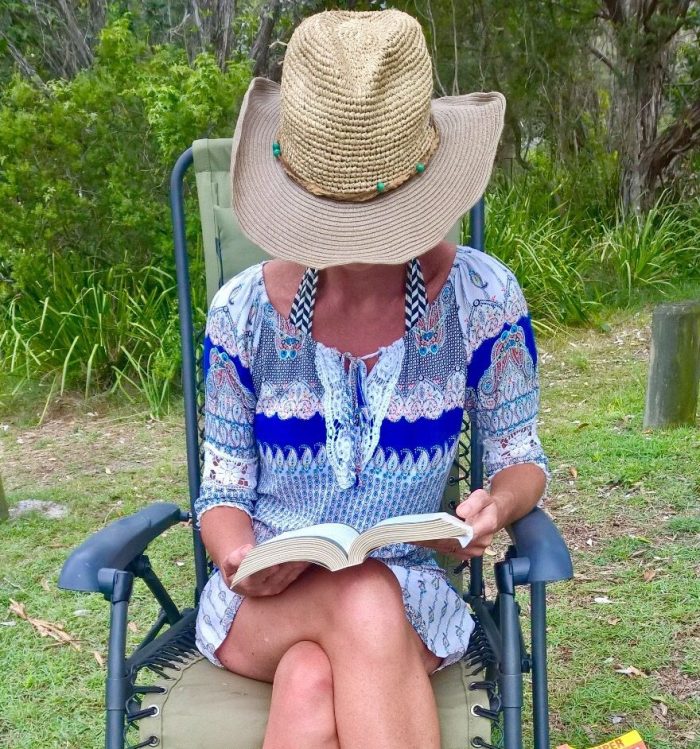 There were also games. I may just be the queen of Uno. 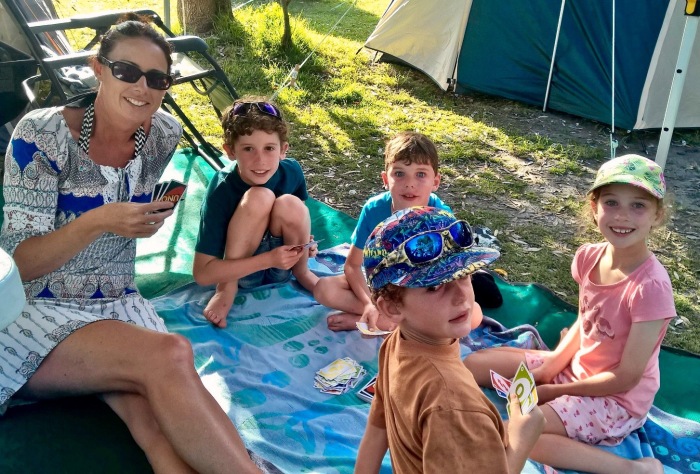 Who doesn’t love a limbo competition?

The kids made new friends.

And smiled whilst doing the chores – impressive!

Camping at Kylie’s Beach costs $12 for each adult adult and $6 per child, per night. Plus there’s the usual national park entry fee of $8 per car per day. Find all the details on the Crowdy Bay National Park website.