Apologies for the title, but it’s late tonight, and the only other thing I could come up with was ‘Houston? No problem’ which I thought was really too cheesy, so… here are our top things to do when you have two days in Houston…

I have to admit that Houston was not at the top of my list of cities to visit (or even on the list, if I had one – I’m not much of a list-maker). It was more by accident that we ended up here. Well, the truth is that the cheapest flights from Sydney to Havana, Cuba, involved transit through Houston, so our being here was more of a chance encounter than planned sojourn.

Since we were travelling through Houston, though, we decided to make a few days of it. Steve works in aviation and is a bit of a ‘space enthusiast’ – let’s just say he’ll never say no to a space documentary – so the NASA Space Center was a drawcard (‘Houston, we have a problem’ and all that – which is a misquote, but more on that later). We were also lucky to be able to catch up with our American side of the family – Rach and Nat – who popped over from Phoenix to hang with us when we said we’d be in town (missed you, Robert).

With only two days in town, we didn’t see all the sights of the city, but what we did do was fun, and recommended if you’re coming for a visit.

The verdict: it was a hit. I’ll let the pictures tell the story.

Venture into a replica space shuttle set atop an historic 747 shuttle carrier.

See the evolution of American space technology. This is the actual Mercury capsule flown in 1963.

And a moon landing diorama. 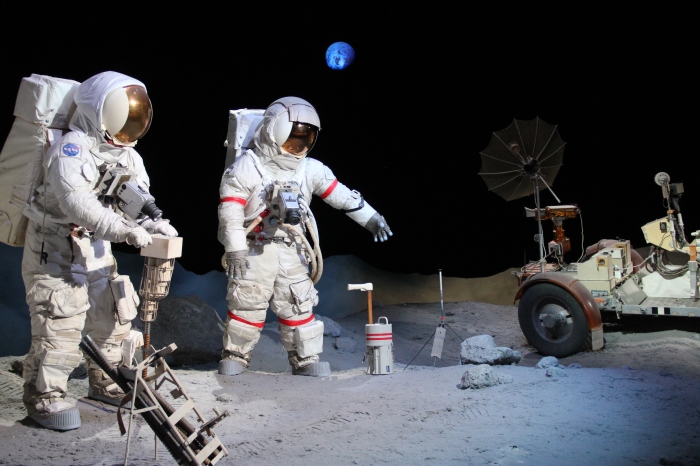 Learn about the possibilities of future Mars missions. We were lucky to hear a talk by Dr Pascal Lee, NASA planetary scientist, about the technology currently being developed to send humans to Mars, perhaps by the 2040s. He was also able to debunk much of the Hollywood version of technology as depicted in ‘The Martian’.

A highlight has to be the tram tour into the NASA Johnson Space Center to visit the astronaut training facilities and see the historic mission control centre, from which all American space missions were controlled from the 1960s until 1992, including the Apollo moon missions.

And did you know that ‘Houston, we have a problem’ is not what was relayed back to control by the astronauts of the failed Apollo 13 mission? Tom Hanks got it wrong.

The Saturn V rocket, which launched many of the Apollo missions, was impossible to fit in the frame. 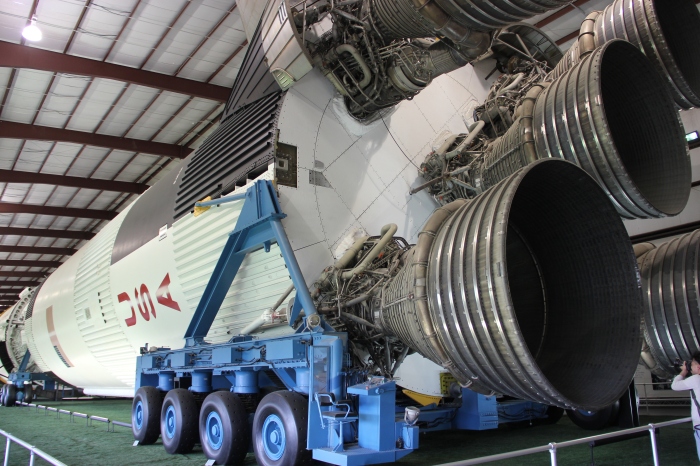 Here’s an old rocket, and my kid eating chips. 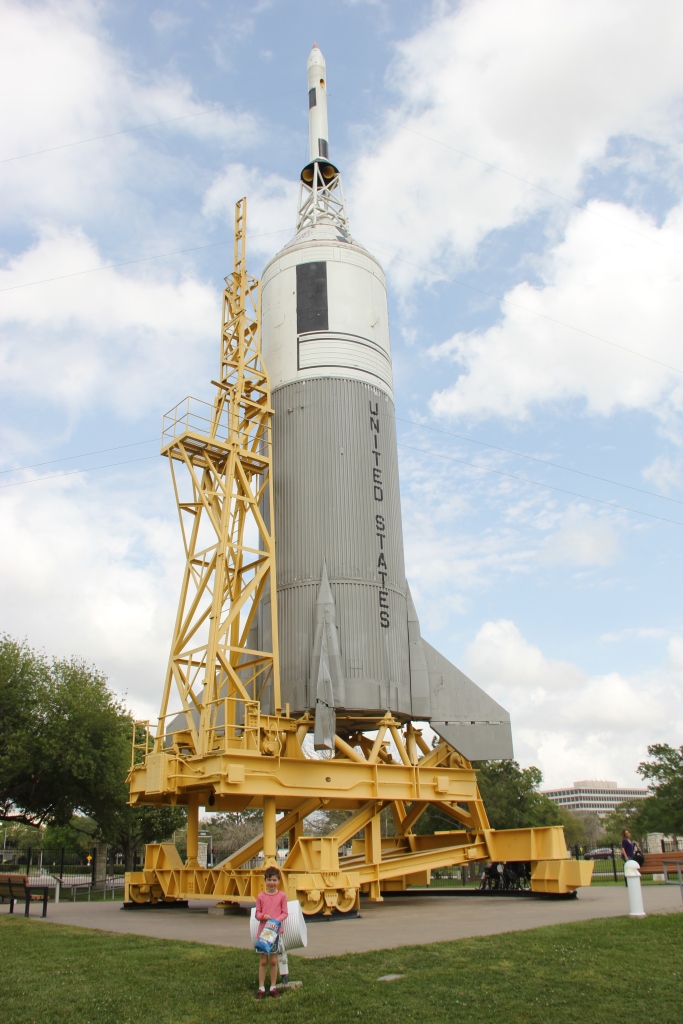 Phoebe’s favourite part of the tour was making friends with this Texas Longhorn, which we spotted along the way. She mooed. He mooed back (apparently). It was glorious.

The tram ride was fun, too.

We’d definitely recommend the joint if you’re heading to Houston. It’s about a 45-minute drive from downtown, so a hire car is recommended. Our hire car had Nevada plates, which allowed us to pass as out-of-towners on the freeway and excuse our sometimes-late lane changes.

This museum is pretty high on TripAdvisor’s list of top things to do in Houston. As is usually the case with kids, the Hall of Paleontology was a favourite, featuring an almost-football-field-size array of dinosaur skeletons and fossils. They do say everything is bigger in Texas, right?

The Hall of the Americas has an excellent collection of artefacts capturing the history of the indigenous peoples of North and South America, and the Ancient Egyptian collection was also interesting, though the dark lighting and ‘spooky’ music made it a bit ‘creepy’ according to Blake.

This is actually inside the Museum of Natural Science, but I have put it as a separate point of interest as it was very cool. Walk through the Brown Hall of Entomology first to find out everything you’ve ever wanted to know about insects. The ‘quiz show’ was a highlight with the kids (and the adults, it seems). 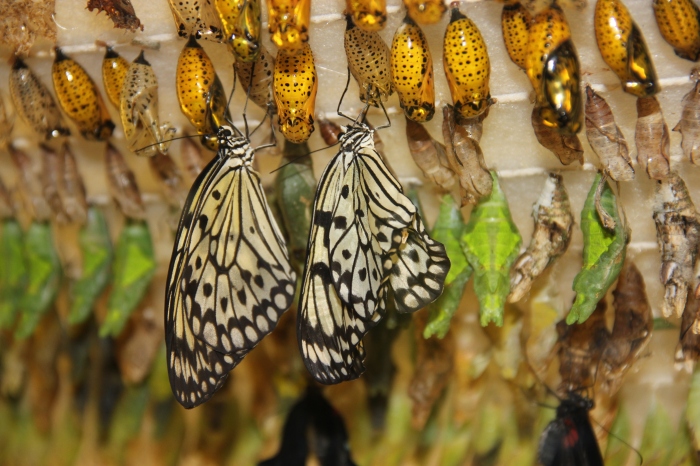 And then wander through the indoor rainforest surrounded by these beauties!

We got to be citizen scientists as well. To research the life expectancies of the butterflies, some of them are tagged. When visitors spot them, they’re encouraged to take a picture and use Instragram for good by posting the photos with the #CBCstudy hashtag. Blake spotted these two for me.

Hermann Park Conservancy is a large expanse of parkland to the south of downtown Houston. The Museum of Natural Science is situated in the park, as is Houston Zoo. A lake, ponds, fountains and squirrels are features. A little train does a 20-minute loop around the park for $3.50pp, which the kids loved. (Blake looks cranky because he thought the train was going to leave without me.)

If you’ve got an afternoon to spare, Kemah Boardwalk is only about 20 minutes from the Space Center (we went after our visit). Have a few rides and dinner by the bay (the view today for us was not salubrious, but it was a little overcast and there’s been a lot of rain lately making the water a little brown). 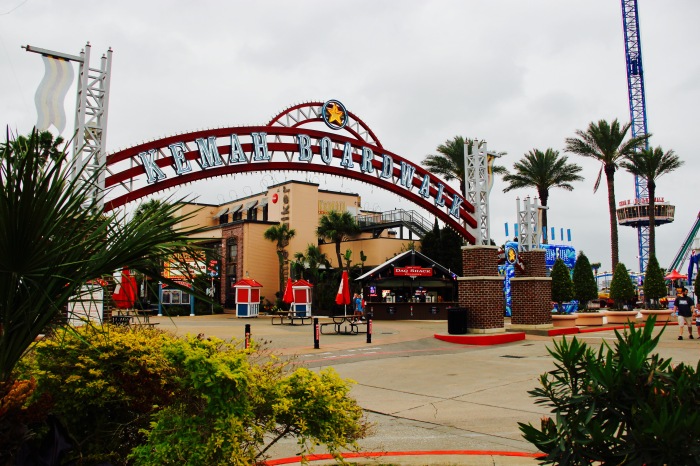 Use the Houston CityPASS for the Space Center, the Houston Museum of Natural Science and Kemah Boardwalk for unlimited rides. CityPASS is $59 for adults and $49 for kids and includes entry to five attractions throughout the city.

Thanks for a fun two days, Houston! It’s been a blast!*

We’re off to Havana tomorrow. Not sure about the Internet in Cuba, but will blog when I can (Mum, and anyone else who might be interested in reading more).