Bellies full of apricots from our fruit-picking adventures in Fruita, the little Mormon township in Capitol Reef National Park, we hit the road again, bound for Moab, Utah.

Only another 2.5 hour drive, Moab is renowned as an outdoor adventure mecca. Four wheel driving across petrified sand dunes? Rafting the Colorado River? Rock climbing red desert buttes? Horse riding in the valley where John Wayne filmed a bunch of his westerns? Mountain biking some of north America’s best trails? Hiking in Canyonlands or Arches National Park? You name it, you can do it in Moab!

We stayed at Moab Springs Ranch, which pops up as you enter Moab from the north, and doesn’t look much from the road, located between Highway 191 and the red desert cliffs. Yet, because it’s built beside a natural fresh spring, the grounds of the ranch are surprisingly green and bursting with life. The place has a rich history; the spring meant the area was home to the Elk Mountain Band of the Ute Nation first peoples. In the early 1800s it was a stop on the Spanish Trail that crossed the west from Santa Fe, New Mexico, to California. In the 1880s stone cottages were built here, including an icehouse in 1887, which has been restored. Butch Cassidy and the Wild Bunch camped here in 1889 after robbing the San Miguel Bank in Colorado. In the 1890s, the current homestead, which is listed on the National Historic Register, was built by the Taylor family of Moab, and Robert and Ethel Kennedy honeymooned here in 1950. Today, accommodation is in modern townhouses and bungalows and the ranch house operates as the reception and office. 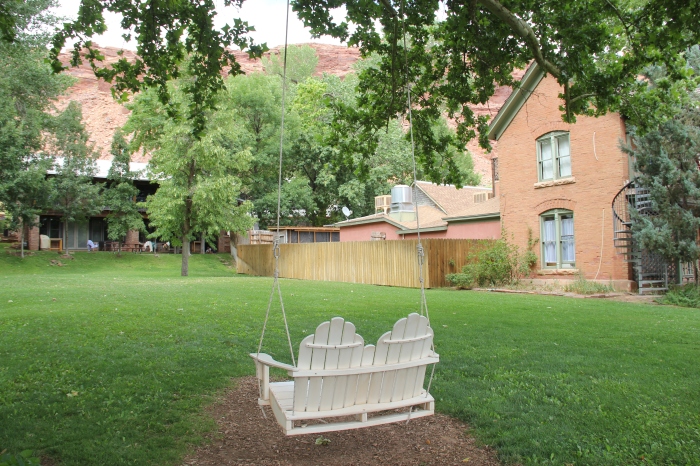 Our townhouse was lovely, but the best part about Moab Springs is the spring, which feeds into ‘The Meadow’, flowing through a channel built for wading and into a clear pond full of fish, then into a stream than runs right across the property. Hammocks are slung between the trees. The spring flowed right past our back door, and the kids loved it! 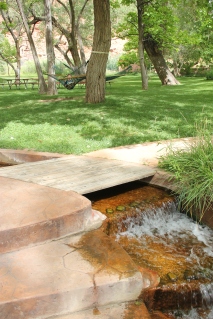 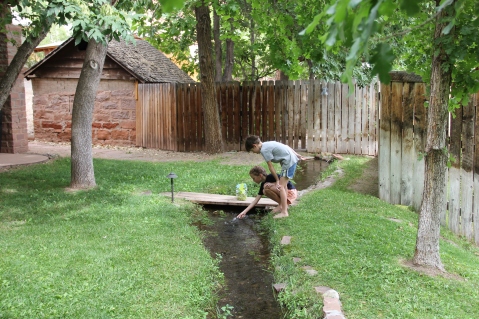 The stream was full of these pretty blue dragonflies. 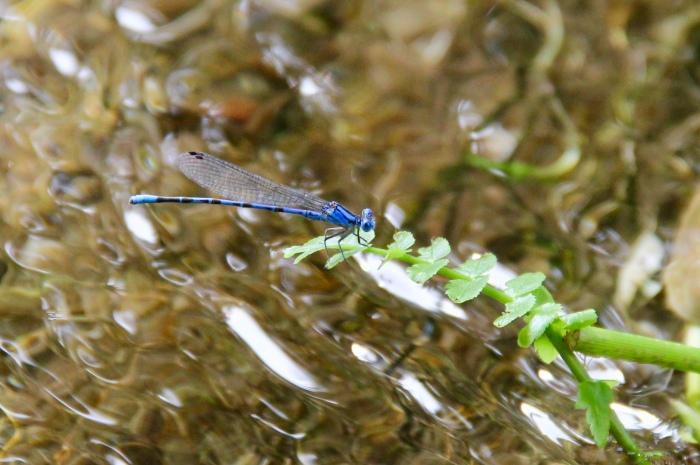 There are a couple of old buildings still standing, including the restored icehouse, on the right. 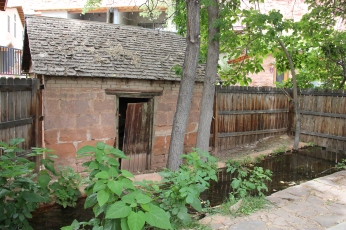 But, we came to Moab for adventure, so first up: an ATV tour on a track called ‘Hell’s Revenge’ across the petrified sand dunes high on the plateau overlooking the Moab valley. We took the sunset ‘T-Rex 4×4’ tour run by Moab Tourism Center, and it was some of the best fun we’ve had on this trip!

The kids were pumped! 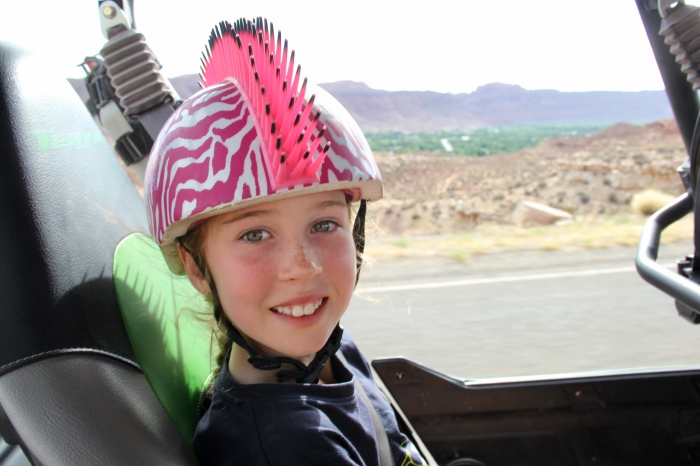 And Steve was in his element in the machine.

The first ascent was a little anxiety-inducing…

And the first descent a little hairy… 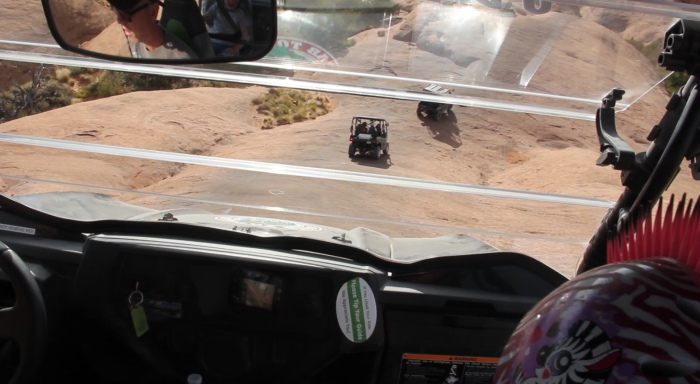 But we took turns and got the hang of it! The rocks we drove across were sand dunes that have been turned to sandstone during a change in climate. 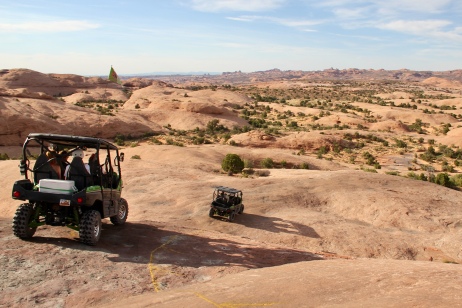 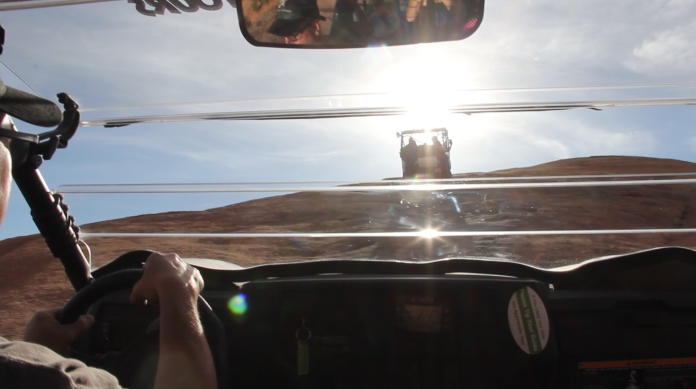 We stopped to look at dinosaur tracks, made about 190 million years ago in the early Jurassic period by a dinosaur named Eubrontes, a therapod (carnivorous) ancestor of the Tyrannosaurus rex. Pretty cool stuff. There are a bunch of dinosaur footprints around Moab. Our guide Danny filled us in on the history and geology of the area. 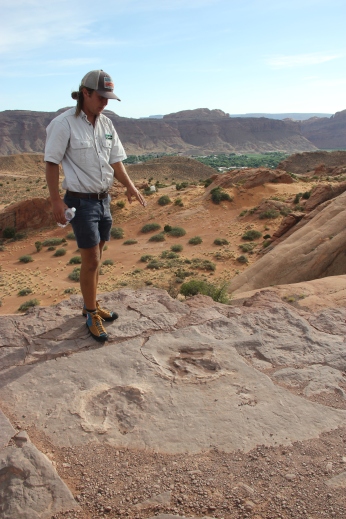 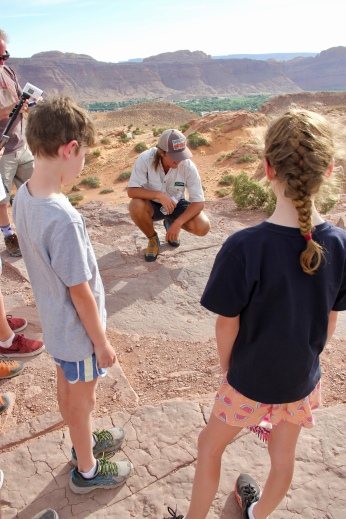 We even got a family photo. 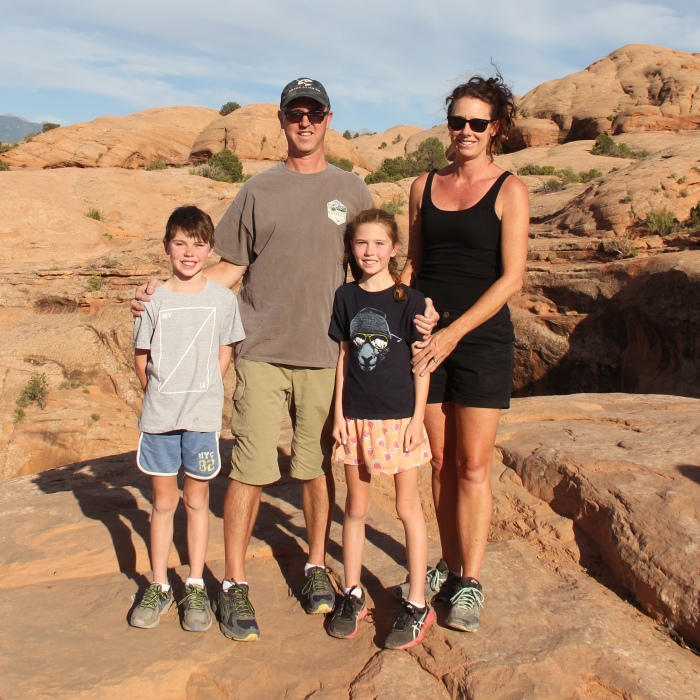 There were some excellent afternoon and sunset desert views, including a stop overlooking the Colorado River. 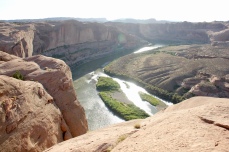 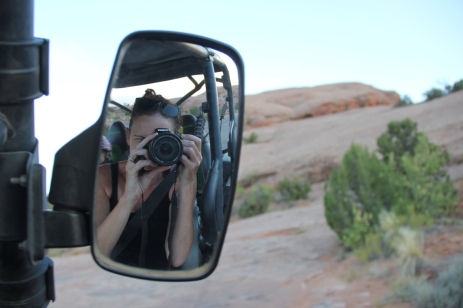 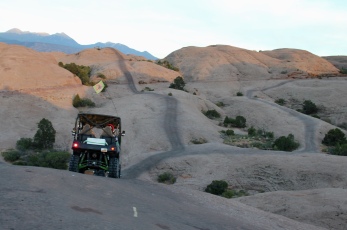 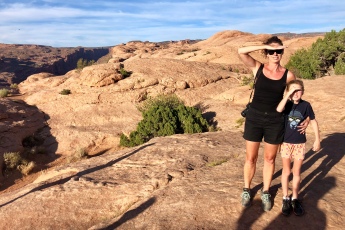 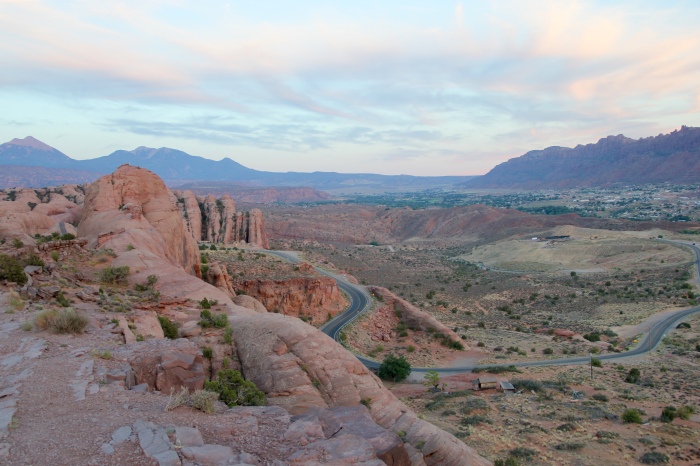 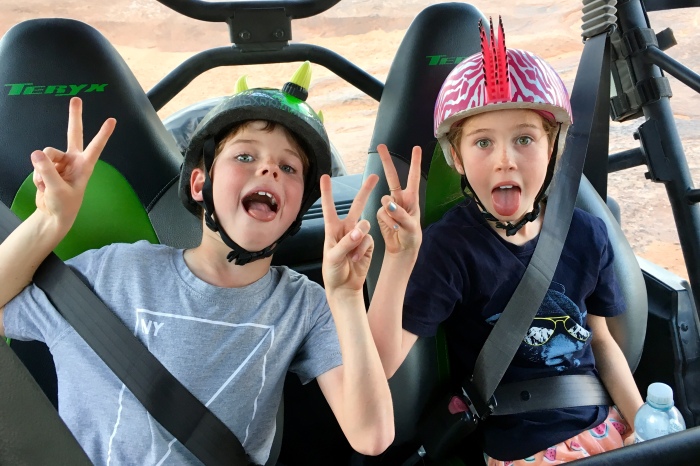 Here’s a vid with a bit more footage of our adventure.

One thought on “Outdoor adventures in Moab, Utah”